The customer service supervisor brings a positive attitude, a sense of humor and empathy. 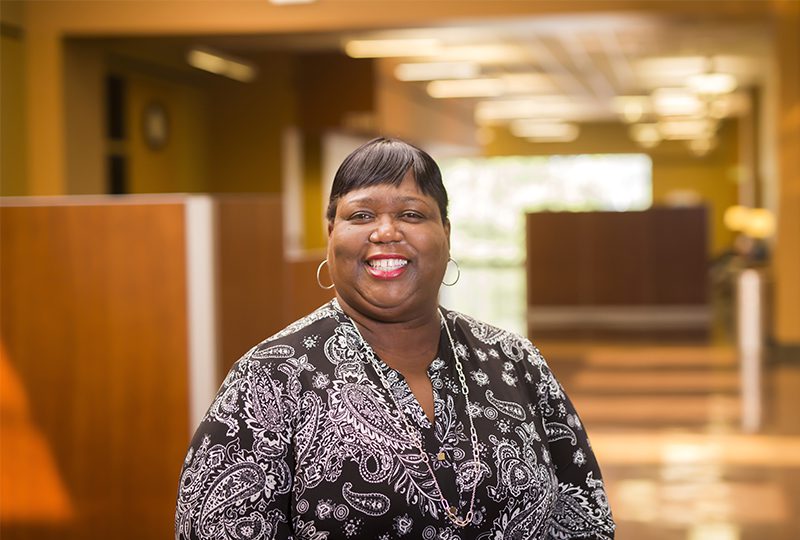 Marchelle Alexander can spot unhappy customers before they reach her office on the third floor of One Hundred Oaks.

She sees them get off the elevator, bills in hand, and looks of displeasure on their faces. If they have reached her desk, it’s because the matter is urgent, and their concerns have been referred specifically to her — the customer service supervisor for patient liability.

She has one goal in mind for each customer encounter, which is typically with a patient or patient’s family member: to make it better. Her technique is simple, yet effective: to listen.

“Most of them are really upset if they’ve walked in,” Alexander explained. “You have to listen to everything. They are so upset, they are not telling you the real issue. Then, you want to turn it around, make it better, respond early and quickly. It takes us having a whole team looking at charges, verifying them. We do a total investigation.”

On an average day, Alexander and her staff of three meet with 22-25 customers who walk in to their office and want answers about financial assistance, denied charges, billing statements or insurance.

“Imagine this bill being your mom’s or your dad’s or your child’s. I believe all employees need to remember the Vanderbilt Patient and Family Promise.”

One such encounter was noted on Alexander’s nomination letter for the Credo Award she received at the Aug. 1 Leadership Assembly.

“Marchelle received a request to follow up with a patient who…stated that his information had disappeared from the [billing] system and he had to give the same information to the clinics repeatedly,” the nomination states. “He was very frustrated and felt that Vanderbilt ‘didn’t care’ about his difficulties. Marchelle began investigating the account and reached out to the patient. She listened while he shared how upset he was with our new billing system and said he was seriously looking at leaving Vanderbilt due to all these issues. After listening she apologized for the many billing issues he was having and began working with him on his account. They were able to contact his insurance together and she was able to successfully get the billing issues corrected. She ended the call with giving him her direct telephone number if there were any future needs.”

Alexander brings a positive attitude, sense of humor and empathy to her job. She has been a VUMC employee for 29 years and possesses vast knowledge of not just the inner workings of the Medical Center, but finance, medical and surgical conditions and terminology, billing and insurance. Most importantly, she treats every patient as if he is a member of her own family.

“You have to have the personality and you’ve got to have the love of the patient,” she said. “Imagine this bill being your mom’s or your dad’s or your child’s. I believe all employees need to remember the Vanderbilt Patient and Family Promise.”