“He is truly the most positive person and a real example of the Credo.” 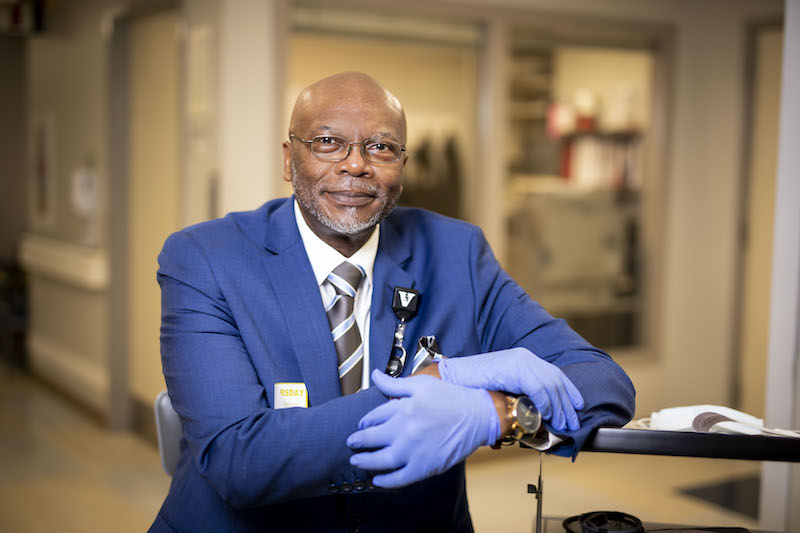 In the early hours of March 3, Thomas Akins and his wife Deborah were at home in bed when their house in East Nashville was slammed by the sixth costliest tornado in U.S. history.

“We heard the tornado siren starting up and my phone beeped and by that time it was on top of us,” Akins said. “We really didn’t have to make a decision what to do next, we just had to listen. I heard it tear the roof off, it’s hard to describe the sound it made, and you could feel the suction on your body. It was like being in a movie. It kind of lifted the house just a little bit, but then it put us back down.”

Lines on the foundation indicate the house was moved less than an inch from where it had been picked up (houses built outside of earthquake zones often rest unattached to their foundations).

“Once rain started coming in on us, we knew we were OK,” he said.

Later that morning, Akins reported for a shift at the Emergency Department at Vanderbilt University Adult Hospital, where he has worked since 2018 as a senior family/guest services representative. Overnight, he and his wife’s vehicles had been destroyed, and they had lost the roof of their house, some windows and doors, their deck and their gazebo. Akins, who volunteers as a Christian educator at his church, recounts the episode with a low-key, not to say impassive, delivery.

The Emergency Department, as it fills with distressed patients and their stressed-out relatives, can be a guest services pressure cooker. According to his colleagues, Akins has a calm disposition and rare people skills, qualities that are no doubt part of what makes him very good at his work, leading to recognition in August as a VUMC Credo Award winner.

Here are some passages from the Credo Award nomination sent by ED staff and managers on behalf of Akins:

“When I am on shift and I know that Mr. Thomas is in the waiting room, I am put at ease knowing, ‘He’s got this.’”

“He is truly the most positive person and a real example of the Credo.”

“When a family member is upset, or a patient is angry, he has a unique and kind way to defuse any situation.”

Within 24 hours of his high school graduation, Akins was on an airplane to Fort Jackson in Columbia, S.C. Starting out in 1978 in Italy in the Signal Corps, he spent 20 years in the U.S. Army in a variety of roles.

His parents were sharecroppers and he was one of 10 children — eight girls and two boys. The family had moved frequently around the Middle Tennessee countryside. “I was about nine years old when you didn’t really have a choice, you had to basically work like a man,” Akins said. “I didn’t like it, but I was up to the task.

“When I had free time, I did a lot of exploring through creeks and fields, spent a lot of time discovering fishing holes and stuff like that.”

Working from a young age to help support his family was formative, and so was growing up Black in the South in the 1960s.

“We got a chance to do a whole lot of work as children, which kind of helped to shape who I am today. I’m an independent thinker. And I don’t like that era, I don’t like the way it was, the racial divide and all of that. So, I try to make sure I’m independent enough to keep a sound mind and not be negative, and I try to treat everybody the way I like to be treated.”

Akins and his wife have three children. Their son, Rico, works in manufacturing, and their daughters, Patrice and Kianna, work in health care.

Akins recently reclaimed some material that blew off of his house in the March tornado and built a treehouse for his grandchildren. 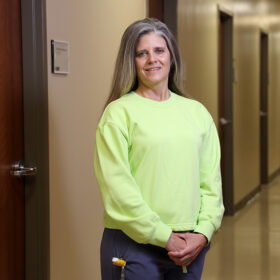