"The mother was so grateful that we were able to get her baby to a safe place.” 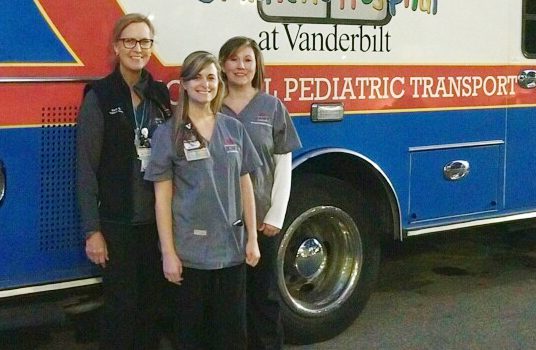 Kathy Snider, RN, Emma Cooley, RRT, AEMT, and Rachel Green, APRN, NNP-BC, were part of the Vanderbilt team that flew to Florida to transport a critically ill newborn baby out of the path of Hurricane Michael.

As Hurricane Michael gathered strength and took aim of the Florida Panhandle last week, doctors and nurses at Gulf Coast Regional Medical Center in Panama City, Florida, knew they needed to evacuate some of their most vulnerable patients out of the immediate path of the storm.

One of those patients the staff knew needed to be out of harm’s way was a 24-day-old baby boy in the hospital’s neonatal intensive care unit.

When the hospital reached out for help, LifeFlight and Monroe Carell Jr. Children’s Hospital at Vanderbilt were ready.

“I had one hour to get to the airport. It was imperative that we get to the hospital needing the patient evacuated well ahead of the storm because of the strong winds.”

This was Tuesday, Oct. 9, and Hurricane Michael was growing more ominous by the hour, increasing in speed and intensity. Panama City was directly in its path.

The Vanderbilt team had to take action. The neonatal team partnered with the Vanderbilt LifeFlight fixed-wing aircraft, based at Nashville International Airport, and the aircraft was ready and waiting when the nursing team arrived.

Snider, a 38-year veteran at Children’s Hospital, got a call asking if she was available to fly to Florida that day. Her plans for the rest of the day had included picking up her grandson from school. Those plans changed.

“I had one hour to get to the airport,” Snider said. “I quickly got on the phone to make arrangements. I knew it was something I needed to do.”

Snider had been on vacation at the beach with her family just a few days earlier. Now, she found herself on the way back to Florida, this time to offer care.

“It was imperative that we get to the hospital needing the patient evacuated well ahead of the storm because of the strong winds,” she said.

After making sure that the baby boy — who will have quite a story to tell about his first plane ride — was secure at the new hospital, the Vanderbilt team took off for home ahead of the approaching storm.

Despite the urgency and hectic nature of the situation, Snider said the Panama City hospital was very calm and organized when they arrived.

“We landed and transferred all of our equipment to the ambulance, which took us to the hospital,” Snider said. “We then had to get consent from the mother, who was not at the hospital. She was so grateful that we were able to get her baby to a safe place.”

In short order, the team members were in the air again, caring for their fragile patient as they headed across the state to North Florida Regional Medical Center in Gainesville.

The team was also able to transport five heart monitors and an additional NICU nurse from the Panama City hospital to care for the incoming patients at the Gainesville hospital.

After making sure that the baby boy — who will have quite a story to tell about his first plane ride — was secure at the new hospital, the Vanderbilt team took off for home ahead of the approaching storm.

“We have done hurricane relief work before, but this was the first time we had done it with the NICU team from Children’s Hospital,” Dreaddy said. “It’s amazing that it all worked out over a course of two hours.”

“Our hearts are with Florida as they recover from the devastating hurricane, and we were proud to offer our services to assist in caring for the tiniest of patients in harm’s way.”

Over the next day, Hurricane Michael devastated portions of the Gulf Coast and inland areas through Florida and the Southeast, killing at least 19 people and causing an estimated $8 billion in damage. Michael was the first Category 4 hurricane to make landfall in the Florida Panhandle since record keeping began in 1851, and its top winds were measured at 155 mph.

Getting patients away from its path was a vital step in making sure its human toll wasn’t even more severe.

“I am so very proud to lend the expertise of our neonatal transport team to others when we can,” Rush said. “I am very grateful to our team of volunteers who responded for this trip which had to occur within a very narrow time frame. Because of them, an infant is in a safer environment for ongoing health care needs.”

“The Neonatal and Pediatric Transport Team’s mission is to provide safe and timely critical care transport services to neonatal and pediatric patients,” said Kate Copeland, MSN, RN, NEA-BC, administrative director of Emergency Services at Children’s Hospital. “Our hearts are with Florida as they recover from the devastating hurricane, and we were proud to offer our services to assist in caring for the tiniest of patients in harm’s way.”