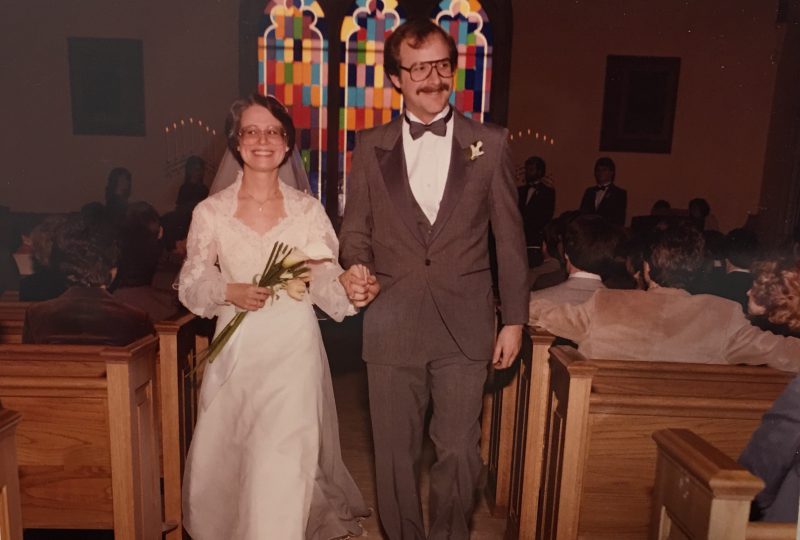 The young Vanderbilt doctor, pediatrics resident Bill Moore, hesitated before dialing the number. It was almost 2 a.m., and he was pretty sure he would be waking somebody up on the other end of the line. He knew from experience that the somebody probably would not be happy.

He told himself he was doing it for a patient, and dialed the number anyway.

To his surprise, when Genie Courtney answered the phone in her Nashville apartment, she didn’t sound sleepy at all. In fact, she was not only alert, but pleasant and helpful.

It turned out that Genie, who was kind of a night owl, had been awake reading a book.

Bill apologized for calling so late, but explained that he was trying to get help for a patient, an 11-year-old boy with cystic fibrosis (CF) who had been discharged from the hospital and was now home in East Tennessee.

The boy was a participant in a clinical study testing commercial formula for CF patients, and Genie, a registered nurse and dietitian, was working on the study as a clinical specialist in pediatric gastroenterology. A member of the family had contacted Bill that night to say they needed more of the study formula right away, and Bill had checked with the Vanderbilt operator to see who the study coordinator was. He ended up with Genie’s number.

“I was glad to help. I told him I’d take care of it,” Genie says. “I was so concerned and worried because I really liked that patient and his family.”

So the next day she arranged with Greyhound Bus’s freight service to send a quick shipment of the boy’s formula, and followed up with Bill to let him know that his late night phone call had gotten results.

This is where a story like this typically would end.

But this story is just beginning.

Recalling those days, Bill doesn’t exactly style himself as the King of Romance.“I used to invite her over and she’d cook me dinner and I’d fall asleep,” he says.

It’s not like Bill and Genie were total strangers. This was 1983 and VUMC was a much smaller place than it is now. People, especially in the same clinical areas, tended to cross paths. Bill and Genie had exchanged polite smiles in hospital hallways, but neither remembers ever speaking to the other. Genie remembers seeing Bill’s name on some documents that would pass through the lab where she worked, but the only impression they left was that he was, as she describes it, a “creative speller.”

But over the days following that late-night call, Bill could not get Genie’s voice out of his mind.

“After I hung up from that first call, I thought, ‘Wow anyone that nice at 2 a.m. — I just have to meet her. It was such a unique combination for her to be thinking about the patient and not herself,” Bill says.

A couple of weeks later, he called her again — to ask her out.

“I was surprised he called again,” Genie said. “We’d had a really business-oriented conversation the first time, but I was happy he called.”

What started as a short conversation ultimately led to friendship, marriage and a life together. Their passion for patient care brought them together and their admiration of each other’s qualities, great communication and life’s many adventures have kept them together and in love for more than three decades.

In 1983, William “Bill” Moore, MD, was a Memphis native completing a residency in Pediatrics, while Mary “Genie” Courtney, MSN, RN, a Texas native, worked in a pediatric gastroenterology lab and had a faculty appointment at the Vanderbilt School of Nursing.

Bill and Genie’s romance on Vanderbilt’s campus created a lot of fun early memories. Looking back, they say that life was, strangely, both simple and stressful.

One evening he proposed to her in the cracker aisle of the Green Hills Kroger.

“I was working really long hours,” Bill recalls. “They didn’t have restrictions on residency hours back then. You worked until you got everything done. We would work 36 hours without sleep and then try to sleep a night and start over.” One time, Bill was sincerely explaining to Genie that he was not going to be able to talk to her much because of his upcoming grueling schedule, and she thought he was trying to gently break up with her. He wasn’t; he was just trying to tell her what his life was like.

Recalling those days, Bill doesn’t exactly style himself as the King of Romance.

“I used to invite her over and she’d cook me dinner and I’d fall asleep,” he says.

Genie says she could see beyond the bone-tired young doctor before her to the character of the man underneath. 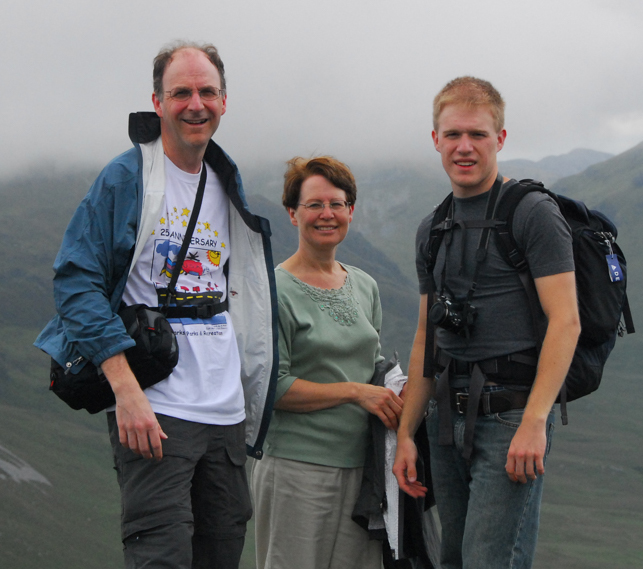 Bill and Genie Moore with their son Evan on a family vacation to Iceland. (Photo courtesy Moore family)

“Bill has a ton of good qualities,” Genie says. “He’s sincere, really hard working and provides great care to his patients and I respect that. He’s nice to everyone, is a good communicator and very, very good with people — especially me.”

They dated for almost a year and Bill knew she was the one he wanted to spend the rest of his life with.

So — remember, not exactly the King of Romance — one evening he proposed to her in the cracker aisle of the Green Hills Kroger.

“We were in the Kroger grocery store,” Bill says. “She was pointing at things and said, ‘You need this item and this item.’ Then I grabbed her by the hand spun her around, looked at her eye to eye and said, ’…and you need to marry me.’”

Genie thought Bill was delirious after his long shift. “You’ll change your mind in the morning,” she said, and went on grocery shopping.

“I was sincere,” he says, laughing. “I think she was used to me being so tired she thought I was talking out of my head.”

Once Genie figured out that Bill’s proposal was genuine, they set a date. They were married on Jan. 7, 1984, at Woodmont Baptist Church in Nashville, surrounded by about 80 family and friends.

“Our wedding day was beautiful,” Genie says. “We had icy weather up until that day and I was worried my parents were not going to get here from Texas, but they did.”

“I went to the back porch of our cabin to get wood to start a fire, and my wedding ring went flying off my finger and down a cliff. It landed in a pile of leaves. I was so upset,” Bill says. With Bill guiding from above, Genie the newlywed bride climbed down the cliff to search for the ring.

For their honeymoon they rented a cabin at Fall Creek Falls State Park, on the Cumberland Plateau east of Nashville, where Bill accidentally dropped his wedding ring off a cliff.

“I went to the back porch of our cabin to get wood to start a fire, and my wedding ring went flying off my finger and down a cliff. It landed in a pile of leaves. I was so upset,” Bill says.

With Bill guiding from above, Genie the newlywed bride climbed down the cliff to search for the ring.

“I pointed to Genie the area where the ring fell,” Bill says. “She turned over the first leaf and there was my ring. I could not believe it! I was flabbergasted! I knew then we were definitely meant to be together.”

Bill completed his residency at VUMC in 1985 and he and Genie moved to Texas for two years to work. They then returned to Middle Tennessee in 1987, settling in Clarksville.

Bill began practice as a community pediatrician in Clarksville, and he has done so now for more than 30 years. He is a clinical professor of Pediatrics at the School of Medicine, and works closely with Monroe Carell Jr. Children’s Hospital at Vanderbilt.

“Children are so fluid. You have such a chance to help them for the good. They are impressionable and I love interacting with them and their parents,” he says.

In November 1988, their son Evan was born. He graduated from Vanderbilt and is now 29 and lives in Seattle.

The family travels and hikes together and have been in numerous countries in Europe, Asia and South America, as well as all over the U.S. and Canada.

And, in addition to demanding jobs and wide-ranging travel, they are busy at home, too. Several years ago they took on a project to build an environmentally friendly house, which they completed in 2014. It is in Montgomery County, and is solar- powered, energy-efficient and built to reduce their carbon footprint.

Bill and Genie say they feel blessed to have found each other.

“It’s definitely a journey,” Genie says. “We’ve grown closer as we communicate and share. We still like to be around each other after all these years. I always have liked him and I think he’s great. I still tell him, ‘I got lucky when I got you.’”

“The key thing is we stuck by each other no matter what,” Bill says. “When it’s good it’s easy. When it’s hard we got closer rather than further apart. We both are willing to dig for each other and help when a family crisis comes up. We are there to support each other and be there for each other,” Bill says. “It makes all the difference in the world. When you look at those times you know you have things going right. God shows you little things that show you need to be together.”

“She’s fun to be around and I like sharing things with her,” he said. “We make each other whole. I don’t know what I’d do without her. My life would be incomplete.”