He hopes the software applications and systems he and his team develop work so well that users don’t even notice them. 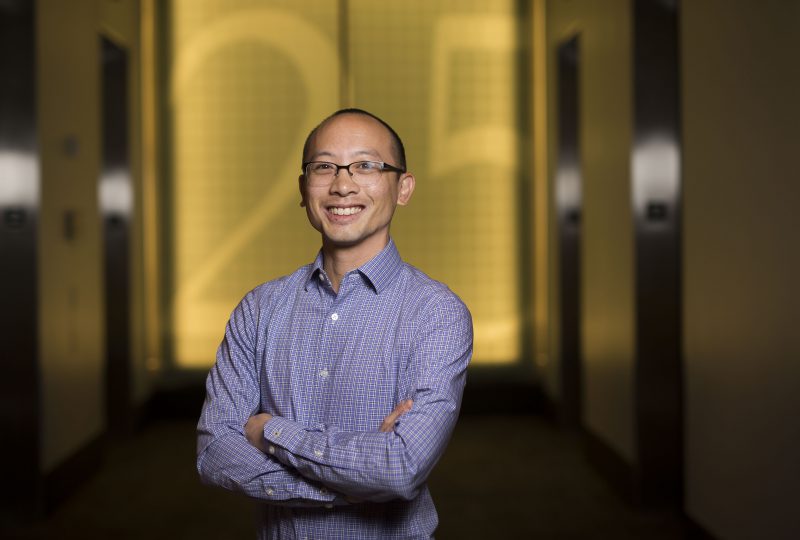 Chris Pua, a senior application analyst at the Vanderbilt Institute for Translational and Clinical Research (VICTR), wants the software applications and systems that he and his team develop to work so well that users don’t even notice them.

“It’s rewarding to me when our applications are seamless, and people don’t see the strings,” Pua said.

In his role as an analyst, Pua works at the intersection between the business teams that use the applications and the developers who create them. For his tireless efforts to span that intersection, Pua was honored with a Credo Award at the November 2019 Leadership Assembly.

He was nominated by developers on the team.

“Application analysts are expected to identify and prioritize business needs, but Chris’s work ethic in this area is unmatched,” a nominator wrote.

Another colleague noted that Pua “has been able to distill the needs of (business teams) into software requirements and workflows that benefit not just the individual teams, but that also drive toward big picture institutional goals around compliance and cost savings.”

“Application analysts are expected to identify and prioritize business needs, but Chris’s work ethic in this area is unmatched.”

Pua joined VICTR in 2017 supporting the Epic Go Live — the switch to the new electronic medical record system called eStar. An application for clinical research called eSMART launched the same year to facilitate billing review, and to provide a gateway for research activity in the eStar medical record system.

His work with the Epic Go Live and eSMART naturally evolved into his current role, Pua said.

“The StarBRITE team supports all of the various software applications that VICTR uses to help the clinical research enterprise. We’re constantly tweaking the applications every day and trying to make them better.”

Pua arrived at VICTR via a “meandering road,” he said. He earned a PhD in biomedical engineering at Duke University, and then took a position in clinical research at the University of California, San Francisco, where he was involved in data management and data analysis. He found it frustrating to navigate processes to keep the research moving forward, for example to start a new study, manage documentation and get approvals, he said.

He then moved into a central administration role where he saw the clinical research support infrastructure from the institution’s point of view.

In his position at VICTR, he connects the needs of the institution, business stakeholders and researchers.

“I’ve really enjoyed working with a wide diversity of people who are all very committed to their work and are open to communicating and collaborating,” Pua said. “It’s been rewarding for our development team to deliver products and see them in action.”

Pua also coordinates efforts to bridge information gaps and streamline processes through system integrations. “That’s a utopian vision where we would have central infrastructure that provides cohesion and unity and guides the allocation of resources,” Pua said.

Pua’s colleagues also pointed out his commitment to the StarBRITE team.

“Often in software development, project managers see developers as a means to accomplish a task. Chris is the opposite,” wrote one colleague, noting Pua’s “thoughtfulness and genuine regard for our well-being.”

“These offer us a fun way to connect with each other and manage our stress,” a colleague commented.

Pua and his wife, Heather Pua, MD, PhD, assistant professor of Pathology, Microbiology and Immunology, have two daughters, ages 10 and 5.