“I love putting smiles on people’s faces when they don’t have a lot to smile about." 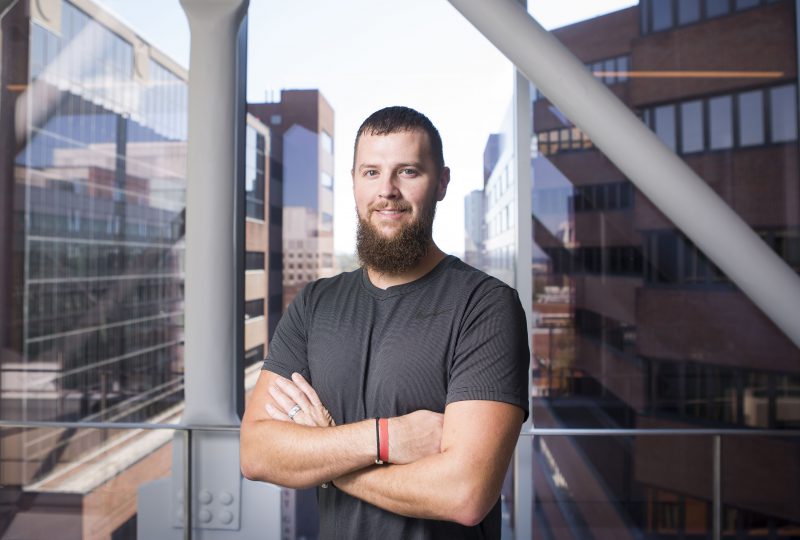 Chris Turner “is often able to pull more out of patients than they believe they can do,” and he “has one of the most infectious positive personalities in the department. His personality uplifts patients and colleagues alike.”

Those descriptions of his work filled a nomination letter that earned him a Credo Award at the latest Leadership Assembly.

Turner is a physical therapist assistant who covers surgery, medicine and cardiovascular intensive care units at Vanderbilt University Adult Hospital, helping recovering patients get back on their feet and back to their lives.

“I love putting smiles on people’s faces when they don’t have a lot to smile about. I often try to take the attention off the situation, because sometimes it’s not a great situation,” he said. “I’m good at mindless things — throwing myself under the bus or just making fun of something.”

Asked for an example, in about two seconds Turner settles on a brief episode from the previous day when he was home in Murfreesboro, Tennessee, cooking dinner as The Incredible Hulk. His wife had purchased the costume for him for Halloween and Turner had put it on at the insistence of his 3-year-old, Jack, who was himself dressed as Spider-Man. That it wasn’t yet Halloween was no deterrent to Jack, who’s always ready to jump into costume, Spider-Man being only one of his many guises.

“So there I was making supper and the two of us are getting ready to go out and check the mailbox. Me, I had to look out of the window to make sure none of my neighbors were looking.

“If your leg hurts, that’s not going to change right now. And rather than leave a patient to dwell on that I might try to make light of something, even if it’s just me being silly about my life.”

Turner says he’s used to being as outgoing or low-key as the situation warrants, guided by each patient’s body language.

Turner grew up in small town Smithfield, Tennessee. He earned a degree in business management from Tennessee Tech University, in Cookeville, where he met his bride-to-be, Sonya, and where he interned with the college athletic department. He started work toward a master’s degree in sports management at Middle Tennessee State University in Murfreesboro but left the program in favor of various jobs in the manufacturing, service and construction sectors.

Chris and Sonya got married on crutches. She had had an accident requiring foot surgery (nearby lake, rope swing), and an automobile accident had sent Turner to the hospital with a large gash in his leg. When the officiant came to “in sickness and in health,” there were snickers in the pews. The couple’s recovery from their pre-wedding mishaps helped pique Turner’s interest in a potential career in health care. He would go on to complete the physical therapist assistant program at Volunteer State Community College in Gallatin in 2011, joining VUMC in 2012.

In addition to their son Jack, Chris and Sonya have a 1-year-old daughter, Leah.