Confessions of a Flulapalooza volunteer

Well-developed biceps. Interesting tattoos. Friends I haven't seen lately. The best question: "Where do I go to get naked?" 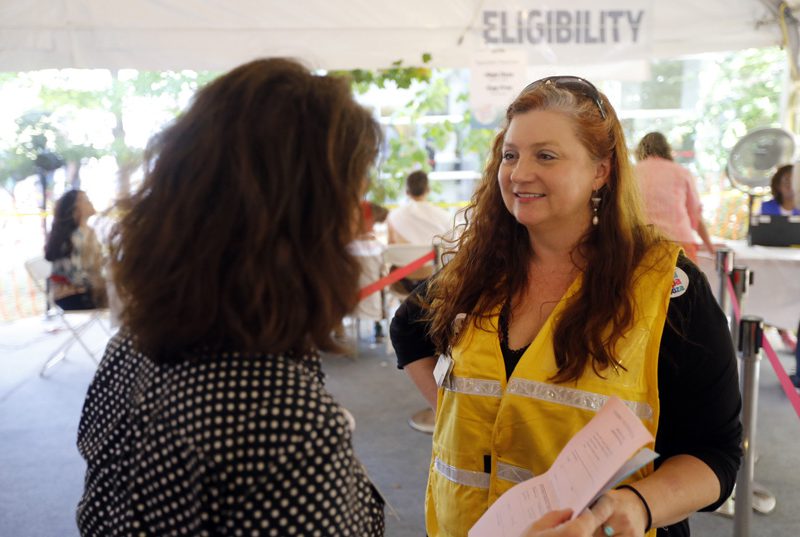 I hate getting shots, but I’ve always looked forward to Flulapalooza, the annual mass vaccination event that Vanderbilt University Medical Center (VUMC) has conducted since 2011.

I’ve worked at VUMC for eight and a half years, and this year, for the first time, I volunteered to help with Flulapalooza. Many of my colleagues from the VUMC News & Communications office volunteered as well.

And it was this year that I finally figured out why I like it so much.

On Flulapalooza day, Sept. 27, I went over to get my own flu shot early. In the very efficient dash through the vaccination tent, I ran into several friends from other areas of the Medical Center whom I have worked with during my time here. After about the third hug and hello, it hit me why I love Flulapalooza. It’s a chance for me to get out of my silo, away from my less-than-sociable email inbox, and reconnect with people I don’t often get to see.

Everyone has his or her own personal shot-taking ritual. A dramatic wince. A stoic stance. An “I’m-about-to-faint” expression. (No one did that I saw.)

I exchanged pleasantries with an NIH-funded scientist, an ICU nurse, a nurse administrator and an environmental technician who has one of the kindest smiles on campus. Flulapalooza is a chance to be reminded that these relationships, these smiles, these people are the main reason I love working here.

This happened 13,938 times at Flulapalooza.

I reported to the Flulapalooza volunteer check-in tent at about 1:30 p.m. with several co-workers. After a quick orientation about our roles, a volunteer coordinator escorted us to our work stations. I was a yellow-vested “patient flow coordinator.” Specifically, I was charged with getting folks into the proper “eligibility” queue at the rear of the tent or to point them toward the exit. Folks were sent to the eligibility line if they had forgotten their IDs, their IDs wouldn’t scan properly or they needed a specialty vaccination (a high-dose vaccine for those 65 and older, or an egg-free vaccine for those with egg allergies).

I also helped folks find the screened corner in the tent if their sleeves were too tight to roll up to receive the shot. Those people needed a place to unbutton or lift up their shirts or do whatever other sartorial adjustments were necessary to get a shot, and a vaccinator could then give them the shot in private.

As my two-hour shift began, the crowd inside the vaccination tent was light, but that soon changed. By 2:30 pm, the tent was abuzz with chatter and activity. By 3:30 p.m., shift change for some people, the line curled around the tent, through Light Hall, through the courtyard and down toward Medical Center North.

No matter how many were in line, however, everyone kept their smiles on, and the process hummed along like a turbojet. Those working at the event were clearly identified by bright, labeled vests, and everyone seemed to instinctively know what they needed to do. I was impressed, and it occurred to me that this efficiency was not an accident—hours of preparation and years of experience have gone into making Flulapalooza such a well-run event.

The line moved quickly, and I didn’t hear a single complaint about the wait. What I did hear was a lot of laughter, happy conversations and thank yous.

The line moved quickly, and I didn’t hear a single complaint about the wait. What I did hear was a lot of laughter, happy conversations and thank yous. When the crowd became a constantly moving stream thanks to my fellow patient flow coordinators, my two-hour shift went by quickly. Those running supplies to the vaccinators got plenty of pedometer steps in as they scurried by with alcohol swabs, bandages and vaccines.

The administrators for the event kept a close eye out for any snags and quickly stepped in if needed. Those giving vaccinations, most of whom were pharmacy students from Belmont and Lipscomb universities, were incredibly competent, efficient and appropriately reassuring.

By the end of the day, 13,938 flu vaccinations had been given. And I like the fact that, in my little tiny way, I helped.

In short, it was all amazing. 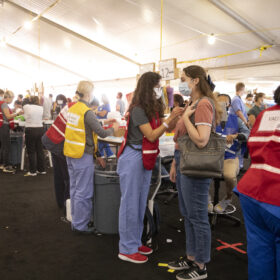 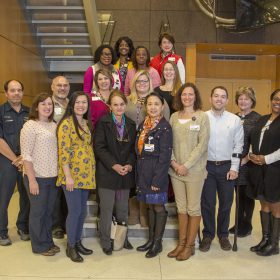 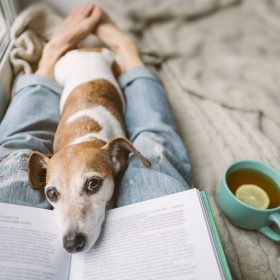 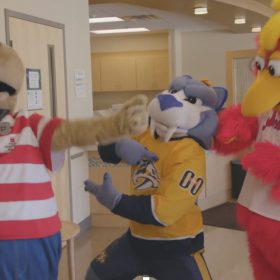