For 20 years, the Nursing Explorer program at Vanderbilt has offered the opportunity to get a head start on a career. 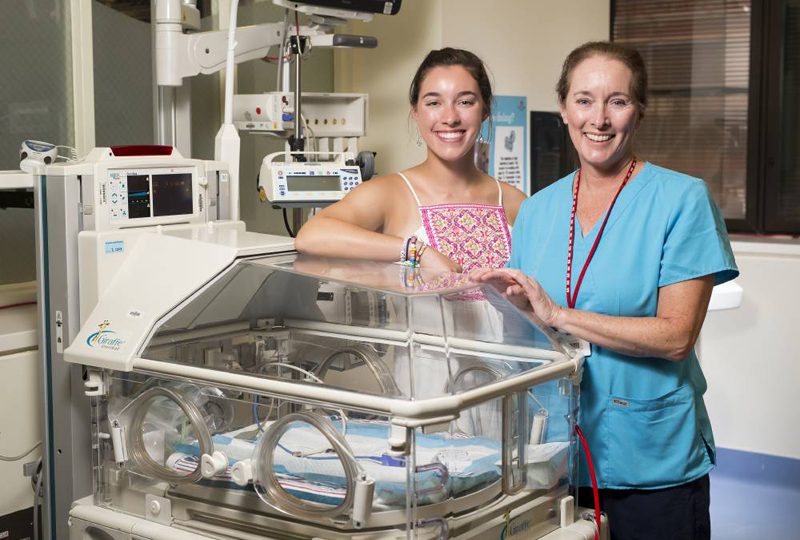 Reed Sparta, a senior in high school, is a current member of VUMC’s Nursing Explorer program; she was inspired by her mom Elizabeth Sparta, R.N., who works in VUMC’s Neonatal Intensive Care Unit. (Photo by Joe Howell).

High school students and young adults interested in a career in nursing don’t have to wait until college to explore the possibilities. For 20 years, the Nursing Explorer program at Vanderbilt University Medical Center (VUMC) has offered the opportunity to get a head start on a fulfilling, lifetime career.

The program—a partnership with VUMC, Boy Scouts of America and Metro Nashville Public Schools—offers youths a chance to learn from nursing professionals and professors at Vanderbilt. From October to May each year, more than 20 participants gather monthly for 90-minute sessions to explore what it’s like to be a Vanderbilt nurse.

“This is just a really great opportunity to partner in the community so that we can bring awareness to nursing as a career choice,” Lilly said.

The program is open to males and females ages 16 to 20, including the children of Vanderbilt University and VUMC employees. The sign-up cost is $30, which goes to the Boy Scouts of America for administrative purposes.

In April, the group gathered at Vanderbilt School of Nursing’s simulation lab, where participants had the chance to practice real scenarios on mannequins. Sally Miller, Ph.D., R.N., assistant professor of Nursing, acquainted them with the lab and with the profession that is her passion.

“My mom has been a nurse for 32 years, and she’s worked at Vanderbilt her entire life. I think just seeing her in her element here at Vanderbilt has helped me decide to become a nurse, because I watched her when I was little.”

“It’s a career that I never looked back and said I wish I had done something else,” she told the students. “There’s so much that you can do with it.”

Other sessions have included programs on Vanderbilt LifeFlight, Labor and Delivery, the Trauma Unit and the Emergency Department. All students have the opportunity to become certified in CPR. They are also exposed to leadership and public speaking opportunities.

Students in the program were impressed by what they had learned. “We were really interested in nursing, so we thought it was a great opportunity to ask for a little more about it,” said Puja Chhetri, 18, a senior at John Overton High School.

The students said the program definitely made them more interested in nursing. Sparta said her mother, Elizabeth Sparta, R.N., inspired her to follow in her footsteps.

“My mom has been a nurse for 32 years, and she’s worked at Vanderbilt her entire life,” she said. “I think just seeing her in her element here at Vanderbilt has helped me decide to become a nurse, because I watched her when I was little. She works in the NICU (Neonatal Intensive Care Unit.) Just seeing her take care of the sick babies, that sparked an interest in me. I think that’s what I want to do when I get older.”

Sparta will begin her studies to become a nurse this fall at Bellarmine University in Louisville, Kentucky. Chhetri and Jamuna Rai, both seniors at John Overton High School, plan to continue their studies this fall at Nashville State Community College and then transfer to a four-year college. Both grew up in Nepal before moving to Middle Tennessee and becoming interested in a career in nursing.

Chhetri said seeing the medical conditions in Nepal inspired her career choice. Her family came to Nashville in 2010. “When we moved here, I thought of doing nursing and I didn’t know a lot about it, but that’s why I joined the program here. I get to see different kinds of nursing programs.”

Alumni of the program often go on to become nurses at Vanderbilt or elsewhere. One of them is Caroline Mauldin, R.N., who joined the program during her senior year of high school and now works in Vanderbilt’s Surgical Intensive Care Unit. She was in the process of applying to college and was trying to narrow her interests so she could declare a major early. She enjoyed science and math, but didn’t know much about nursing and wanted to learn more.

“The Nursing Explorers program began my curiosity of nursing,” she said. “This program most certainly influenced my decision on becoming a nurse. Before the program, I didn’t know what nursing was about, but after the program I felt excited to continue exploring the profession and art of nursing. After undergrad, I was selected to work at Vanderbilt as part of their Nurse Residency program in 2014. I have also started classes at Vanderbilt University to further my nursing education. I hope to graduate in 2019 as a Family Nurse Practitioner.”

Marilyn Dubree, MSN, R.N., NE-BC, VUMC’s Executive Chief Nursing Officer, was instrumental in signing the charter to bring the program to Vanderbilt two decades ago. She was among the people celebrating the 20th anniversary of the program earlier this year.

“It has been so gratifying to see the hundreds of participants who have benefited from the Nursing Explorer program, including some who went on to become nurses at Vanderbilt,” she said. “Part of our responsibility of being nurses is passing on our knowledge to the next generation, and I can say confidently that our profession is in good hands.”

For more information about the Nursing Explorer program, contact Novonda Lilly at novonda.lilly@vumc.org or 615-343-4043.