“His selfless service to the community knows no bounds, and his ability to make projects come to fruition is unmatched.” 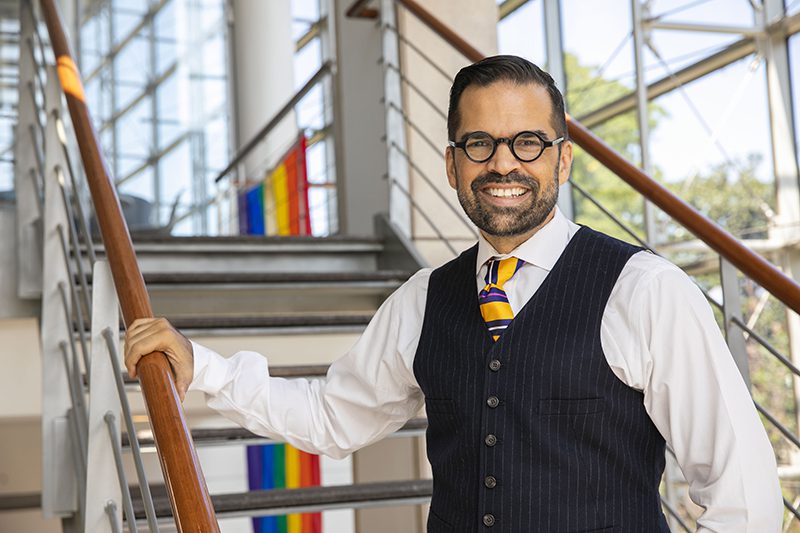 Daily tasks you’d find in Del Ray Zimmerman’s job description as director of the Office for Diversity Affairs and LGBTQ Health include:

Aside from his busy day-to-day responsibilities, Zimmerman has also taken on the following projects, none of which were required for his role:

According to his colleagues, Zimmerman has a track record of identifying needs, taking initiative and successfully implementing creative solutions to fill gaps for a community that often faces widespread bias and misunderstanding. For this, he was awarded the Five Pillar Leader Award at the Leadership Assembly on Aug. 14, recognizing his leadership in service, quality, employee engagement, growth and finance, and innovation.

“His selfless service to the community knows no bounds, and his ability to make projects come to fruition is unmatched,” reads one of Zimmerman’s five nomination letters.

Another adds, “To say we are better off because of Del Ray would be an understatement to his dedication to help others.”

Zimmerman became interested in making LGBTQ health a professional focus after noticing gaps in care for gender and sexual minorities.

“I realized there was a real lack of community, and I started to see things that were missing here in Nashville. At the same time, I was seeing young people coming out at an early age without the supports they needed,” said Zimmerman.

Since joining the program in 2016, Zimmerman has played an integral role in establishing Vanderbilt’s new adult and adolescent transgender clinics that added more extensive surgery options to VUMC’s roster, a project that took two years of planning before launching last year. The process included training roughly 300 bedside staff on how to effectively communicate with transgender patients, who require up to weeklong stays in the hospital following surgery.

“The truth is, these patients call because when they call me, they can be themselves. I allow them to be who they are, and that’s pretty compelling. I’m not just a person they’re calling to get information from,” said Zimmerman.

To maintain relationships with the community, Zimmerman volunteers at events such as the LGBTQ Youth Prom and the Transgender Day of Remembrance, and he holds a board position with an organization that works with school administrators to create safer schools for LGBTQ students.

His familiar face offers a safe place to turn when people are in need.

“When a trans patient is facing discrimination at work, they call Del Ray. When a gay man moves to Nashville and has run out of HIV medication, he calls Del Ray. When a physician wants to find support for a gay man with advanced rectal cancer, they call Del Ray. And each of these patients has been served at Vanderbilt quickly and with dignity because of Del Ray,” stated a third nomination letter.

While his job is to connect patients to health care resources, many also call Zimmerman simply because he lends a compassionate ear. Some even call weekly to ask for program updates.

“The truth is, these patients call because when they call me, they can be themselves. I allow them to be who they are, and that’s pretty compelling. I’m not just a person they’re calling to get information from,” said Zimmerman.

“The opportunity to do this work is a real dream come true. I know I have aligned my passion with my work. While I’m honored to receive this award, what it really symbolizes to me is that I’m being recognized for the passion that I carry, and that means more to me than anything.”