As a lead supply technician for VUMC, Jones knows the work his 15-member team performs daily is vital to support doctors and nurses capabilities to carry out procedures. 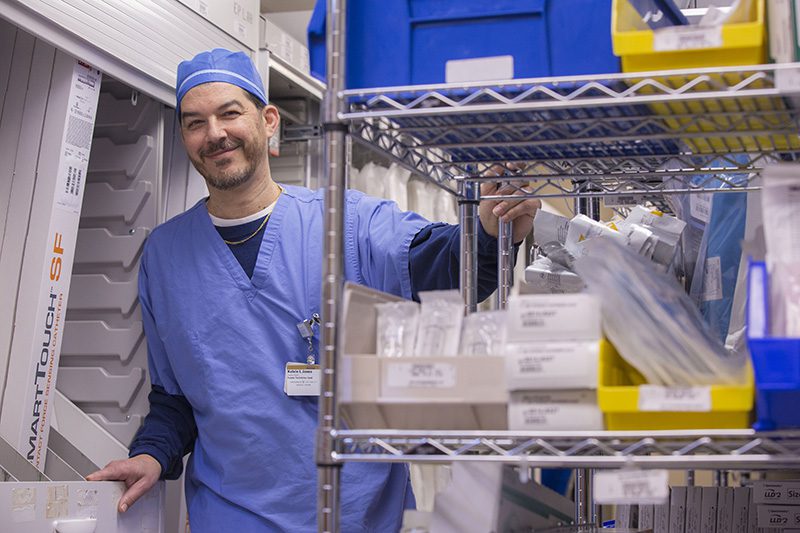 He’s worked in the retail and restaurant industries.

He even tried his hand at photography for a while.

But, he says, his job at Vanderbilt University Medical Center is something he loves, has a passion for, and knows makes a difference in the lives of patients and those who care for patients.

As a lead supply technician for VUMC, Jones knows the work his 15-member team performs daily is vital to support doctors and nurses capabilities to carry out procedures. His team is responsible for receiving and supply for the cardiology catheterization and electrophysiology (EP) labs, and also services gastroenterology, radiology and Monroe Carell Jr. Children’s Hospital at Vanderbilt.

“Our priority is to make sure they have everything they need so they don’t have to cancel cases. We make sure we communicate with everybody and that they have the products to do their jobs,” Jones says.

His commitment, positive attitude — and daily smile — weren’t unnoticed. Jones received a Credo Award at the Feb. 14 Leadership Assembly for his work as lead supply technician.

“I was very surprised — I was curious who submitted (the nomination),” Jones says. “You don’t think people notice what you do — you go on with your day. I was pretty happy someone had noticed.”

The nomination letter for his Credo Award read, in part: “Kelvin arrives to work with a smile on his face and a positive attitude every day. It is with this sunny disposition he models credo behavior to an EP lab of 22 staff members…his work ethic is exceptional.”

“Kelvin communicated not only effectively but in a timely manner a supply issue that could lead to a negative outcome and impact the department’s ability to accommodate patient procedures…He makes it easy to address concerns and issues as they arise,” the nomination said.

Jones learned some of that flexibility growing up in a military family. He was born in London, but has lived in Nashville since 1977. He has a 16-year-old daughter and a 21-year-old stepdaughter. When he’s not at work, he enjoys watching sports, playing softball or dabbling in photography. He also loves to cook, especially spaghetti, and if he has the time, he can make a hearty lasagna.

Before arriving at Vanderbilt three years ago, Jones developed his chops in supply for Opryland Hotel, where he worked for six years. The Nashville flood of May 2010 left the hotel under water and him without a job. After a time taking care of his father through a terminal illness, Jones decided to pursue an interest in the medical field and combine his skills in supply. VUMC was a natural fit for him.