“I’ve worked in four institutions with a ton of people in a role like hers, and I’ve never encountered anyone even close to her caliber.” 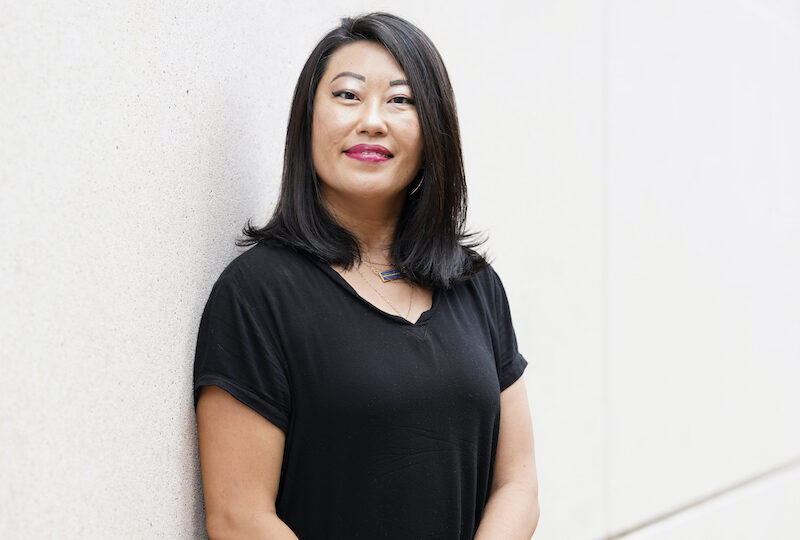 In addition to her many administrative duties, Craker is also the contact for the Institute’s incoming international graduate students, many of whom have never been to the United States. And she is the official organizer of team-building events in her office, something she jokingly calls “Forced Office Fun” or “FOF.”

The events are anything but forced, her colleagues say.

Craker organizes cook-off challenges, ugly sweater holiday parties, decorates the office for holidays, and last year, organized a Halloween party complete with a costume contest. She remembers everyone’s birthday, and after the COVID-19 pandemic hit and most in the department began working from home, she organized a heartfelt goodbye parade driving past the home of a colleague who was leaving to take a job in another city. She then took up money to buy him a gift certificate for restaurants in his new city.

For this and much more, Craker was being honored with a Credo Award at the Aug. 12 Virtual Leadership Assembly.

One nominator wrote that the department is “yet to find the limits of her bandwidth,” and mentioned that she is already doing the work of more than two people. “I’ve worked in four institutions with a ton of people in a role like hers, and I’ve never encountered anyone even close to her caliber.”

She’s a dedicated employee who does much more than her job description calls for, the nominators wrote, including helping ensure international students working with the VIGH have housing, aiding them in obtaining their stipend and helping set up bank accounts. Craker juggles a lot of requests, but always replies, “sure, send it my way!” when another plea for help comes her way, one nominator wrote.

Once, during the trainee orientation period on a hot summer day, she walked a student across campus to make sure he found his way. She ended up staying and waiting for the student to finish, then walked him back to their office.

“I don’t consider that a job. I consider that just being a nice human being. I feel like you’re placed on earth to help people feel better about themselves and make life a little easier. The weather was super hot that day and the last thing you want for someone who doesn’t know his way around is to be lost and wandering around campus.”

Craker and her husband, Eric Wikman, a songwriter and music producer, moved to Nashville from Los Angeles in January 2019. She joined the IMPH/VIGH shortly after they moved here.

She said she loves her colleagues and couldn’t have dreamed of a more perfect job. “I’m working with people who are doing great work worldwide. They’re making a huge difference. For me to support those faculty members who are out there fighting the fight is really inspiring for me, and makes me want to be a better employee and a better person.”

Her team-building events are beloved by her colleagues. One nominator said that after the Halloween party and costume contest she organized last year, the staff left “feeling amazed and connected to colleagues in a new and deeper way.”

Craker loves organizing the events. “They are doing such serious, hard work,” she said. “My job is to make their life easier. Being a little silly and goofy, that leaves people refreshed to go deal with serious stuff again. I can’t imagine what they’re doing and how stressful their jobs are. If I can make their jobs a little more light and fun, I’m there for it.

She said she can’t believe she was nominated, then selected to receive the Credo award.

“I can’t believe that I lucked out with this position. Our faculty members are the sweetest, kindest, most giving people. For them to say I’m going above and beyond is just icing on the cake for me. My husband and I are so lucky. He’s doing what he loves in Nashville and I’m doing what I love. Not everyone gets that opportunity.”

Her Credo Award video is here: