"To actually see patients where the research changes the quality of their lives, that’s a huge success." 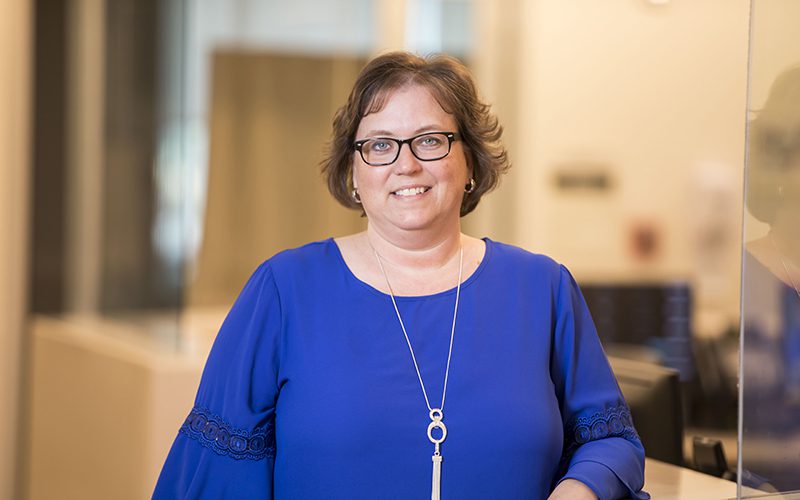 When Lana Howard, BSN, RN, CCRP, learned Vanderbilt University Medical Center’s Clinical Research Center (CRC) would be moving from the third floor of Medical Center North to a more accessible location on the second floor, she saw an opportunity.

She rolled up her sleeves and began quizzing the nursing staff and investigators about features they felt could improve the patient experience, make workflows more efficient and expand research opportunities in the CRC.

Howard’s strong leadership as manager of CRC Patient Care Services during the challenging relocation is just one reason her supervisors and colleagues nominated her for the Five Pillar Leader Award. She received the award, which recognizes exceptional leaders at VUMC who model a balanced approach to leadership across the five pillars of excellence and the Credo, at the June 13 Leadership Assembly.

“Lana was a tireless voice for CRC users’ interests in the planning and build-out phases, attending numerous — a number that probably exceeds three digits — meetings and providing critical feedback at all stages,” said CRC Director Kevin Niswender, MD, PhD. “She was able to provide critical feedback as a voice for multiple contingencies, including CRC leadership, nursing, patient volunteers, investigators and study team members. The result is a space that is truly remarkable and a reflection of her leadership excellence.

“The complexity of moving from one space to a new space over a weekend with no disruption to the clinical research enterprise cannot be understated. The fact that this major move was seamless to investigators is a testament to her multidimensional leadership skills.”

The CRC is a bustling research hub that has supported hospital-based clinical research at VUMC since 1967. The main CRC is now in a light-filled, central space in Medical Center North’s Round Wing, with a pediatric satellite unit at Monroe Carell Jr. Children’s Hospital at Vanderbilt in the Doctors’ Office Tower.

“The complexity of moving from one space to a new space over a weekend with no disruption to the clinical research enterprise cannot be understated. The fact that this major move was seamless to investigators is a testament to her multidimensional leadership skills.” Kevin Niswender, Director of the Clinical Research Center

The new CRC space opened in December 2018, and Howard is especially proud of the on-site laboratory with plenty of room for processing and shipping samples, as well as the much larger patient rooms that can accommodate a wider variety of studies.

“The move has been probably the most challenging, but most rewarding, thing I’ve ever done as a manager,” Howard said. “It was awesome to be able to plan the space and involve the staff in figuring out changes that would improve our workflow. It was wonderful to brainstorm those ideas and then actually see it happen.”

Since she was hired as a CRC staff nurse in 2005, knocking down roadblocks to research has been Howard’s main mission, and one of her greatest satisfactions has been watching junior investigators grow from having a fledgling study concept to being awarded external grant funding to pursue larger research projects.

“Clinical research can be a very daunting process,” Howard said. “There are a lot of things investigators have to do before they ever have a patient participating in a study at the Clinical Research Center, and it’s my job to remove barriers to their success.”

A remarkable 219 studies with 125 investigators are currently underway at the main and pediatric CRC locations, and Howard said she’s amazed by the dedication of individuals who volunteer for the studies, often taking time off from work and traveling for hours to participate.

“They are just so committed,” Howard said. “We have study participants with chronic diseases who know we likely won’t find anything today that will help them, but it might help their grandkids. They’re all about helping the next generation and helping us gain knowledge.”

During her 14 years at the CRC, she’s supported studies that have led to significant breakthroughs. An example is a Phase 2 trial conducted by Kathryn Dahir, MD, and Jill Simmons, MD, that used Strensiq (asfotase alfa) to regenerate bone for patients with hypophosphatasia, an inherited disorder that affects bone and teeth development.

“To actually see patients where the research changes the quality of their lives, that’s a huge success,” she said. “That’s exciting!”

Away from the CRC, Howard and her husband, Brooks, have four daughters, ranging in age from 24 to 16. They’ve always participated in sports and in church group activities, so Howard became an avid scrapbooker to document their lives.

“Now, the retiring nurses get scrapbooks that I make from things we’ve done at the CRC,” she laughed.