Kristie Kuzy decided to donate a kidney to a stranger. Her generosity initiated the first three-recipient kidney transplant chain in the history of Vanderbilt University Medical Center. 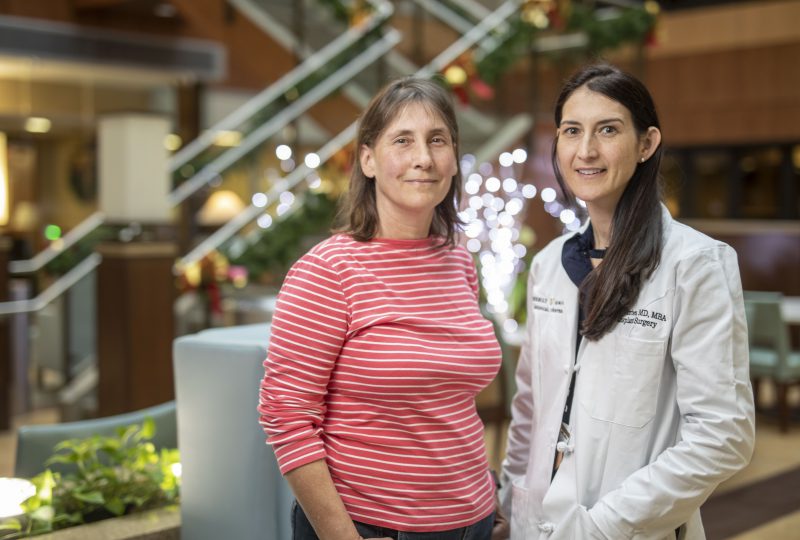 Kristie Kuzy was touched by a post on social media a little over a year ago from an acquaintance whose son needed a kidney transplant.

Kuzy stepped forward as a donor to give her friend’s son a second chance at life.

Unfortunately, she wasn’t a match.

That might have been the end of it  — good intentions, but no result.

The chain was made possible by people who, like Kuzy, originally expressed a desire to donate to loved ones but had incompatible blood types.

That’s not the decision Kuzy made. She decided to donate anyway — to a complete stranger.

That second effort at donating started a chain reaction that resulted in not just one, but three people getting kidneys — the first three-recipient kidney transplant chain in the history of Vanderbilt University Medical Center.

The donations and transplants occurred on two days, Dec. 6 and 11, 2018. Three pairs of donors and recipients were part of the chain of transplants. The chain was made possible by people who, like Kuzy, originally expressed a desire to donate to loved ones but had incompatible blood types.

Through Vanderbilt’s living kidney donor program,  coordinators matched these willing donors with strangers who were compatible. The coordinators performed a deft juggling act — ensuring the pairs passed a months-long battery of health tests to ensure compatibility and arranging a convenient time for donors and recipients to meet for transplants.

“For this to work out the way that it did is just astounding and all made possible because of Kuzy coming forward,” said Kaylin Centanni, BSN, RN, living donor transplant coordinator for the kidney/pancreas program at the Vanderbilt Transplant Center.

It all started with Kuzy, a 55-year-old preschool teacher in Huntsville, Alabama.

Like all potential donors, Kuzy underwent a spate of medical evaluations to ensure she was a good match and healthy enough to be a donor. These tests include blood tests, urine tests, blood pressure readings, an electrocardiogram (EKG), chest X-ray, diabetes screening and CT scan of the abdomen.

“I thought it might be a little awkward at first, but it really wasn’t. We text now and we’re friends on Facebook. We’re going to have just a lifetime bond.”

This was the first place the process for all three recipients could have gone awry; less than half of prospective donors pass these tests.

“There are multiple factors that we look at,” Centanni said. “The very first thing is blood type compatibility. We look at antigen markers and antibodies. Outside of this, we also look at the individual patients including age, sex and body habitus.”

Kidney donations can come from either deceased or living donors, since people are born with two kidneys but can live a normal life with only one. Many recipients receive a kidney from a friend or family member, a relatively quick process. But patients who don’t have a compatible and willing friend or family member are placed on waiting list, and the wait can be very long, potentially years.

Recipients who have an approved incompatible donor are placed in the Kidney Paired Donation (KPD) Program, which not only includes pairs at VUMC, but also national matching programs, including the Alliance for Paired Donation (APD) and the United Network for Organ Sharing (UNOS). Some incompatible donors agree that if they can’t donate to their loved ones, they will donate to a stranger, in return for their loved one being matched with another incompatible pair. Pair A will donate to the recipient in pair B, and vice versa, something called paired donation.

More transplants can occur in a domino or chain, even across the country. Since 2013, VUMC has participated in more than 10 national chains.

“Now I get to have my life back because of [Kuzy]. I get to be healthy again and no more dialysis which is so amazing.”

Centanni maintains the VUMC paired donation database including all approved but incompatible pairs. The list changes constantly, but one recent check showed 11 pairs were active and waiting to find matches.

So – back to the story of the VUMC chain of transplants.

With this many donors and this many recipients, things kind of get complicated.

A man named Steve (he asked that his last name not be used) had been on the list for two years and he had a donor who was incompatible.

But last year, that all changed, and the chain led back to Kuzy.

Here’s how: Annalise Perry of Shelbyville was put on the transplant list last year. She had an incompatible donor named Gabrielle Hargrove.

Perry had the relatively rare blood type B. Hargrove had blood type O.

And here’s where Kuzy comes in again — her blood type was B, just like Perry’s.

Centanni called the donors and recipients to give them the good news that everything, amazingly, had fallen into place.

“I was ecstatic about it,” Parker said. “I was just so happy. It was like a dream come true for me.”

“This three-way chain was certainly a team effort, involving all of the kidney transplant surgeons, transplant nephrologists, our living donor coordinators, and so many individuals in the Vanderbilt Transplant Center who worked hard to make this a reality. We cannot thank our donors and recipients enough for trusting us with their care.”

Kuzy met her kidney’s future recipient, Perry, a few weeks before their surgery at a pre-op appointment. “She was just really easy to talk to and I was just thrilled to meet her,” Kuzy said. “I thought it might be a little awkward at first, but it really wasn’t. We text now and we’re friends on Facebook. We’re going to have just a lifetime bond.”

Perry had a previous kidney transplant in 2010, but her kidney function eventually deteriorated to the point where she needed a new one. She was on dialysis and on the Vanderbilt kidney waitlist when “Kristie just kind of came out of the blue.”

“As soon as we saw each other it was just like an instant connection,” Perry said. “We have a special bond for the rest of our lives now. It’s a really beautiful thing and I try to tell people you don’t have to be dead to donate an organ. She’s going to have a full, happy, healthy, normal life.”

Perry now says she feels much better and, in addition to returning to full-time work in her family’s real estate business, she’ll get to travel much more because she isn’t on dialysis.

“Now I get to have my life back because of [Kuzy],” Perry said. “I get to be healthy again and no more dialysis which is so amazing.”

“Kristie’s gift of life allowed three people to receive transplants with the gifts of their own donors who just happened to not be a match,” she said. “This three-way chain was certainly a team effort, involving all of the kidney transplant surgeons, transplant nephrologists, our living donor coordinators, Kaylin Centanni and Kara Warmke, our KPD liaison Kristin Smith, and so many individuals in the Vanderbilt Transplant Center who worked hard to make this a reality. We cannot thank our donors and recipients enough for trusting us with their care.”

Kuzy said she doesn’t want to toot her own horn about being a donor, but decided to go public to raise awareness about organ donation. Altruistic donors, like her, have their medical costs covered, and quality of life is great with one kidney.

“I recommend it because even though there was some inconvenience and some pain, it’s worth it to be able to give somebody their life back,” she said.