For her work, the Occupational Health Clinic Director was recognized with a Five Pillar Leader Award. 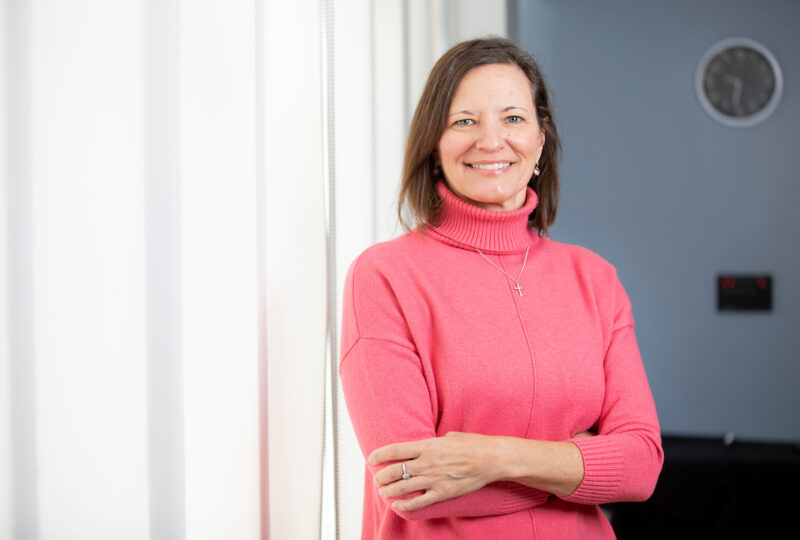 When Lori Rolando, MD, MPH, director of the Occupational Health Clinic at Vanderbilt University Medical Center, counsels employees about the importance of maintaining work-life balance, she speaks from hard-won wisdom.

“I had been in practice as a vascular surgeon for about three years,” Rolando said. “I loved my patients and the work I did, but I didn’t feel like I had any balance in my life between work and personal time. It was getting to a point where I was either going to have to make a long-term commitment or make a change. I had a heart-to-heart with one of the partners in my practice, and she suggested I might find occupational medicine interesting.”

Occupational and environmental medicine (OEM) is a preventative medicine subspecialty that focuses on the health of workers, including their ability to perform work; the impact of the workplace’s physical, chemical, biological and psychosocial elements; and the health outcomes of environmental exposures.

OEM felt like a perfect fit. Rolando is a genuine coal miner’s daughter. Because of her father’s high-risk occupation, she understood early that safeguards and regulations put in place to protect workers pay off in longevity and quality of life. And after making countless surgical repairs due to the vascular damage caused by diabetes and smoking, approaching medicine from a preventative angle instead appealed to her.

Rolando completed a second residency in Occupational and Environmental Medicine at Mount Sinai School of Medicine of New York University, while simultaneously earning a master’s degree in public health. Rolando began working in her new field at VUMC, alongside two physicians who quickly became mentors – then Occupational Health Director Melanie Swift, MD, and Mary Yarbrough, MD, MPH, executive director of Vanderbilt Faculty and Staff Health and Wellness. In May 2017, Rolando was named director of Occupational Health when Swift took a position at Mayo Clinic.

Rolando received VUMC’s Five Pillar Leader Award during the November 2022 Leadership Assembly for her exceptional leadership, particularly as the COVID-19 pandemic added many critical and demanding tasks for her team. The award recognizes leaders who consistently model a balanced approach to leadership across the five pillars of excellence – people, service, quality, innovation, growth and finance – and the Credo.

Early in the COVID-19 pandemic, Rolando and her team created an invaluable REDCap tool to monitor VUMC employees thought to have been exposed to the virus. An initial survey gathered information about the exposure and any symptoms, and follow-up surveys screened for symptoms.

“Lori has stood out as a leader and rallied her team to the challenges of an entire workforce challenged with the unknowns of a new disease,” said David Posch, MS, Executive Vice President of Population Health. “She has been untiring in caring for all of us, developing and supporting services to include testing, contract tracing, behavior support to limit transmission and care for those who have been ill.

“Importantly, Lori has been central to getting us vaccinated and boosted. And while Lori has stood out on matters related to the pandemic, normal occupational health issues, which are a full-time effort in and of themselves, have been quietly and seamlessly continued.”

Rolando — as great leaders do — credits to her team and shares her award with them.

When fully staffed, the Occupational Health Clinic includes around 40 employees, including physicians, nurse practitioners, nurses, occupational health specialists and support staff. Throughout the pandemic, team members worked tirelessly, were flexible and stepped into any role they were asked to fill, especially during the vaccine rollout and infection surges, Rolando said.

“We have an amazing group in Occupational Health and in Health and Wellness more broadly,” she said. “Our role was to be a resource and to take care of the Vanderbilt community. During the pandemic we needed to make sure the folks who were trying to protect everybody else were themselves protected. That was a really solemn responsibility.”

While Rolando and her team worked long hours and some weekends during the worst of the pandemic, she continually reminded team members that they had to take time off and maintain their work-life balance, no matter what.

Rolando, whose favorite pastime of travel was paused during the pandemic, recently put funds she’d saved for a London trip toward a new home instead. She’s unpacking while her cats insist on helping or at least supervising. She’s looking forward to cheering on her beloved Boston sports teams from her couch and in person when they challenge the Titans and Predators. And Rolando kept in touch with her parents in Illinois through Zoom calls during the pandemic, but she’s looking forward to celebrating the holidays together with them soon.