“Her dedication and service to VUMC, her staff and her patients cannot be measured. I feel honored to have worked with her.” 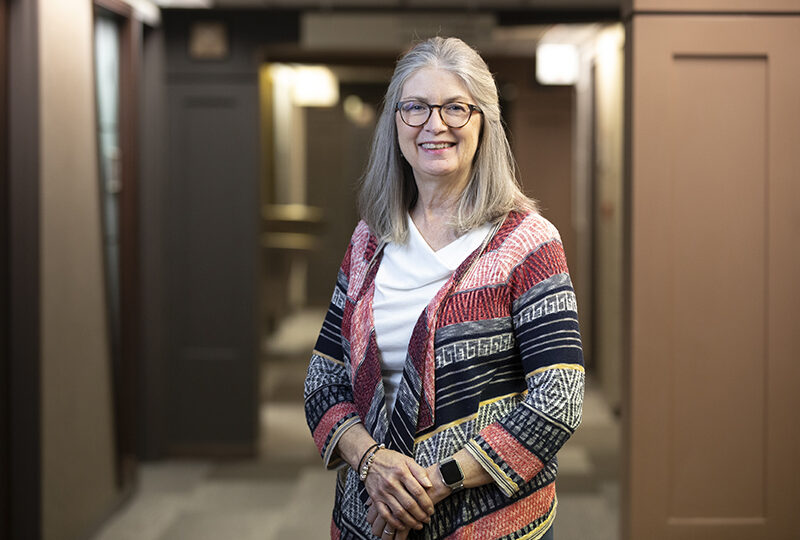 Lou Kaelin, MSN, RN, wears many hats as a manager for patient care services at Vanderbilt Heart and Vascular Institute (VHVI). Among them are: exceptional nurse,  beloved leader, excellent communicator and technology expert, which was especially relevant when the world shifted to a virtual format during the pandemic.

Kaelin’s philosophy of never asking anything of her staff that she has not done herself has earned her significant respect from her colleagues as well as a Five Pillar Leader Award at the May 2022 virtual Leadership Assembly.

“Lou works so hard but completely effortlessly to foster a team, treat people kindly, ask how your day is going or help a staff member with a personal crisis,” one of her nominators wrote. “I have never had a manager as exceptional as Lou. Her dedication and service to VUMC, her staff and her patients cannot be measured. I feel honored to have worked with her.”

Kaelin became a nurse due to her strong interest in science and her enjoyment of helping others. She joined Vanderbilt in 1991, working in the Neuro Intensive Care Unit before transitioning to the Adult Emergency Department (ED). In 1997, Kaelin took her first leadership role in the ED as assistant manager. In 2002, she completed a Master of Science in nursing at Vanderbilt. Shortly after that, she took her first manager role in the Clinical Staffing Resource Center. Kaelin moved to VHVI in 2014 and has remained there since.

Kaelin balances managing the Anticoagulation Clinic, Cardiac Telephone Triage and both VHVI clinics in Kentucky. She enjoys supporting and collaborating with her teams as well as problem solving and working closely with patients, but her favorite part of the job is leading her staff and encouraging them to take excellent care of patients. Her passion for leading is seen loud and clear by the personnel she manages daily, who nominated her for this award.

“I was so honored to hear that I had been nominated and had won,” Kaelin said. “I couldn’t believe it. I feel that I am not exceptional — I just do what I need to for my staff and teams, so they are able to do their work and keep clinics open and running well. My success comes from having great staff who are committed to their work and make patients their highest priority.”

After 37 years of service at VUMC, Kaelin will retire this year. She plans to travel across the country with her husband in their Airstream. Kaelin will be sorely missed, but her colleagues know she has earned her retirement after many years of dedication to her clinics, staff and patients.

“I have had many wonderful managers at VUMC, but never anyone as exceptional as Lou,” another nominator said. “She is an extraordinary manager. Her efforts and energy make her completely irreplaceable.”