Vickie Thompson has devoted her career to caring for children. Her daughter Kelsey is following in her mom's footsteps. 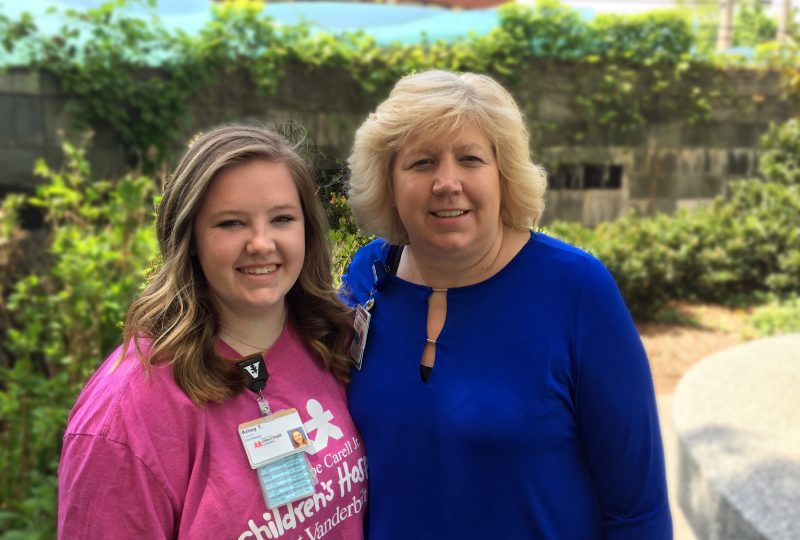 Vickie Thompson, MSN, RN, remembers the day in late 2003 when her 4-year-old daughter, Kelsey, stopped to have her photo taken with Champ at Monroe Carell Jr. Children’s Hospital at Vanderbilt.

Champ, Children’s winsome canine mascot, was on hand to celebrate the upcoming opening of the new, freestanding Children’s Hospital. Kelsey just happened to walk by, wearing a dress with three paper dolls holding hands, not unlike the logo of Children’s. 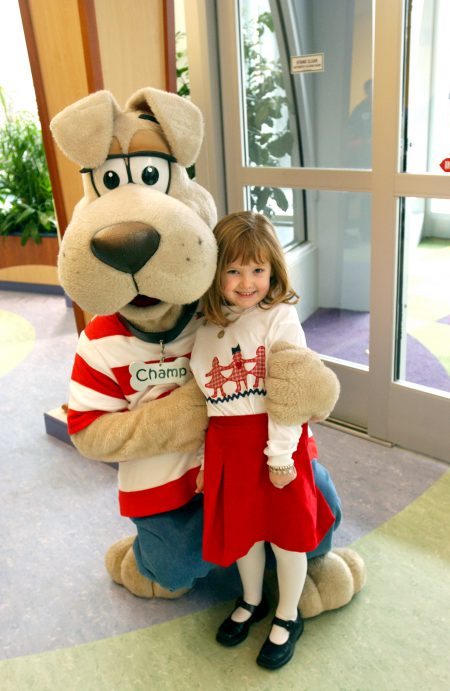 Kelsey Thompson was only 4 years old when she was on hand to celebrate with Champ at the ribbon cutting ceremony for Monroe Carell Jr. Children’s Hospital at Vanderbilt in 2003. File photo by Dana Johnson

Medical Center photographer Dana Johnson captured the moment just next to the first-floor entrance of the hospital.

Fifteen years later, Kelsey is using that entrance again, this time as a Vanderbilt employee. She is working part-time as a care partner in the float pool at Children’s and is a rising senior in nursing school at Western Kentucky University.

Kelsey is too young to remember that day, but her mom does. And this Mother’s Day, Vickie is proud to be the mother of a budding nurse.

“I’m really excited because she’ll be here a lot during the summer and we’ll be opening the new floors on June 18 and so I’m hoping that as part of the float pool she’ll be able to help with that move and get to experience that move,” Vickie said. “My goal was to have her working here by the time we opened those new floors so she could be a part of that.”

“I just thought it would be cool, because she was here for the grand opening and now she’ll be here for the expansion.”

The Thompsons both share a love of nursing. Growing up in Central Kentucky, Vickie felt the pull to the profession since she was a high schooler. Her father was a minister and took her with him to visit the sick in hospitals and nursing homes. “I just loved that environment and watching people help other people in that setting,” she said.

Her grandmother, who had always wanted to be a nurse, encouraged Vickie to become one. She did, starting at University of Kentucky Hospital and coming to Vanderbilt a year later in 1992. She’s been here ever since, starting as a staff nurse on the adolescent unit in what is now the adult hospital.

Before moving to the freestanding hospital in February 2004, Children’s Hospital occupied the fourth, fifth and sixth floors of what is now the adult hospital. Thompson became the nurse manager of the fifth floor and helped design the new Children’s Hospital, where she now works as manager of Nursing Special Projects.

Kelsey said she decided to become a nurse during her senior year of high school at Davidson Academy.

“Just being around it (nursing) my whole life here, my mom being a nurse, influenced me to want to help people like she does,” she said. “I always said I was going to be a veterinarian. But I decided I wanted to work with people. That’s just kind of when it hit me.”

“The Children’s Hospital has such a family feel. They treat the whole family as a patient, not just the patient.”

Vickie said she remembers exactly where she was when Kelsey told her. She was driving Kelsey to school from her home in Hendersonville and they were on the on-ramp to Interstate 65 from Vietnam Veterans Parkway.

In January, Kelsey started working as a PRN, or “as needed.” She has been working one 12-hour shift per month while she is in nursing school, and hopes to pick up more shifts this summer.

She said she likes the variety of the float pool — a group of nurses and care partners who go to supplement existing staff in units where they are most needed. “I like the change of pace,” she said. “Every floor I go to is different.”

When she graduates with her Bachelor of Science in Nursing degree next year, she intends to apply for a nurse residency at Vanderbilt. She hasn’t settled on specializing in pediatrics, as her mom has, but she’s considering it.

“The Children’s Hospital has such a family feel,” Kelsey said. “They treat the whole family as a patient, not just the patient. I know it’s really hard on parents, so I think that’s awesome.”

Both mother and daughter say they enjoy working together.

“I like it,” Kelsey said, “just knowing that she’s there and having somebody who knows who I am and knows how I think.”

“We can talk about things at home that nobody else understands,” Vickie said. “Sometimes we’ll ride to work together. It’s just that commute time that we can share.” 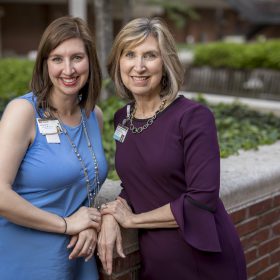 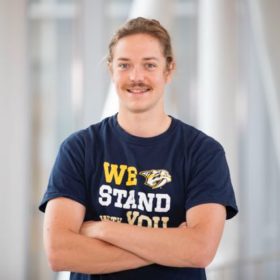 Staff Nurses of the Year named 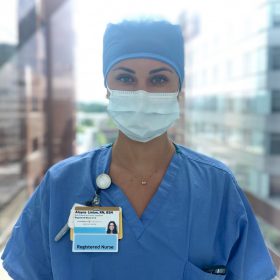