The pair of complex surgeries took 13 hours. When he woke up, he felt like a new person. Since 2011, there have been 38 liver-kidney transplants at VUMC, helping establish Vanderbilt as one of the leading sites in the country for multiple-organ transplants. 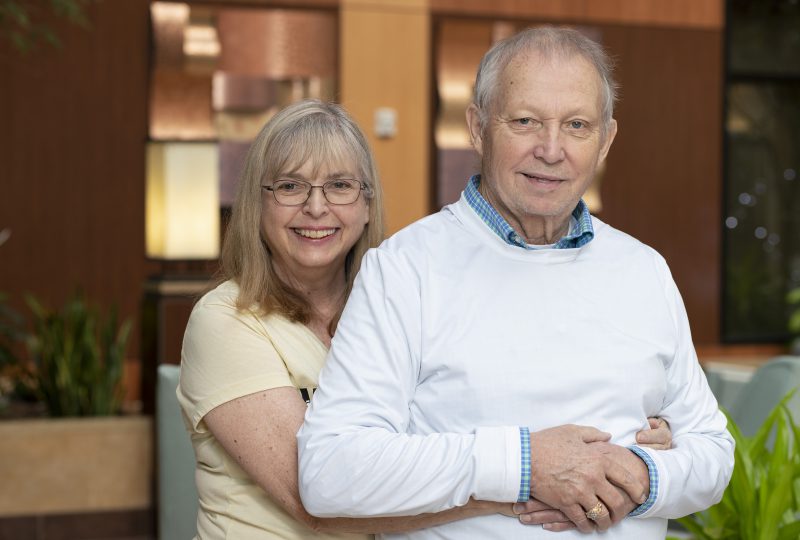 Marsha and Richard Hosner are thankful for Richard’s new life since his double-organ transplant at Vanderbilt. Photo by Joe Howell

Richard, 70, of northern Alabama, was diagnosed with cirrhosis of the liver in early 2018 during a routine physical. He just didn’t feel well, but he didn’t know how dire his situation would become. By the end of the year, “he was practically immobile,” his wife, Marsha, recalls. “He couldn’t walk any distance at all.”

“I was yellowish to my skin and sick to my stomach all the time,” Richard added.

“She told Richard, ‘you are very, very sick’,” Marsha said. “And something about actually hearing that, on the one hand, was a huge relief. OK, we know what’s wrong for sure. And at the same time, was terrifying because, OK, what’s going to happen now?”

Marsha recalls Shingina saying, “We’ll just get him a transplant.”

Vanderbilt has that process down to a science, Marsha said. The Hosners and their secondary caregiver, Jeff Rothermel, went to training classes — and multiple doctor visits and subsequent hospitalizations with Richard starting in March 2019 — getting them ready to care for him after the transplant.

Richard had to go to the hospital frequently for IVs and examinations and medication adjustments by doctors from the liver team. He frequently had to have paracentesis — removal of fluid from his abdomen. He developed varices in his stomach and esophagus and an enlarged spleen from the failing liver. He was barely hanging on.

In April he would end up in a critical medical condition requiring a stay in the ICU for 10 days. He was watching his beloved Auburn University Tigers playing in the basketball finals when he collapsed.

“The next day I could not wake him up,” Marsha said. She had to call an ambulance, and after being stabilized at the local hospital, he was rushed to Vanderbilt.

Richard had acute renal failure from a combination of hepatorenal syndrome, a rare disease in which patients with advanced liver disease suffer kidney failure as well. From that day he was also on dialysis.

To make matters worse, Richard developed a condition called hepatic encephalopathy. “He didn’t know who he was, where he was,” his wife recalled.

Richard became very angry with his care team, and that wasn’t like him — just not his personality. And it really wasn’t him; it was confusion caused by his liver failure — a very common side effect of the disease. His doctors were afraid he was changing his mind about the transplants.

“I prayed very hard the 12th night in the hospital. I thought he had given up,” Marsha said. “Then the next day he swears he had a visit from above that somebody talked to him. From that day on, he had a positive attitude that everything was going to be OK. And it was.”

On April 25, 2019, Marsha got the call to bring him back to the hospital; a donor had been identified. The next day, Richard was admitted to the hospital for the tenth time that year and received a liver and kidney transplant. The liver transplant was first, led by D. Lee Gorden, MD, professor of Surgery and Cancer Biology. Then the team of doctors and nurses changed, and after a brief pause, the kidney transplant was done, led by Douglas A. Hale, MD, associate professor of Surgery.

“When I woke up, I was a new person. I felt really good instantly,” Richard said. “There’s nothing better than Vanderbilt Hospital for anybody that needs any kind of work. Not just liver or kidney transplant.”

“Anyone in this situation needs to remain positive,” he said. “It will get better. Things just go so much smoother with a positive attitude.”

Richard remains under the care of Shingina for his new liver and Saed Shawar, MBBS, assistant professor of Medicine, for his new kidney. He is very grateful to all the staff in the Adult Emergency Department and on the seventh and ninth floors of the Critical Care Tower, where he spent much of a year. He said he wanted to thank all the many doctors who helped him through his illness.

“You need to change the name of your hospital,” he said. “It needs to be changed to heaven. Because all of your doctors come from there, evidently.”