Her son’s legacy motivates Tonya McBride to serve others

“I’m here doing what my son wanted me to do, so that makes a big difference for me." 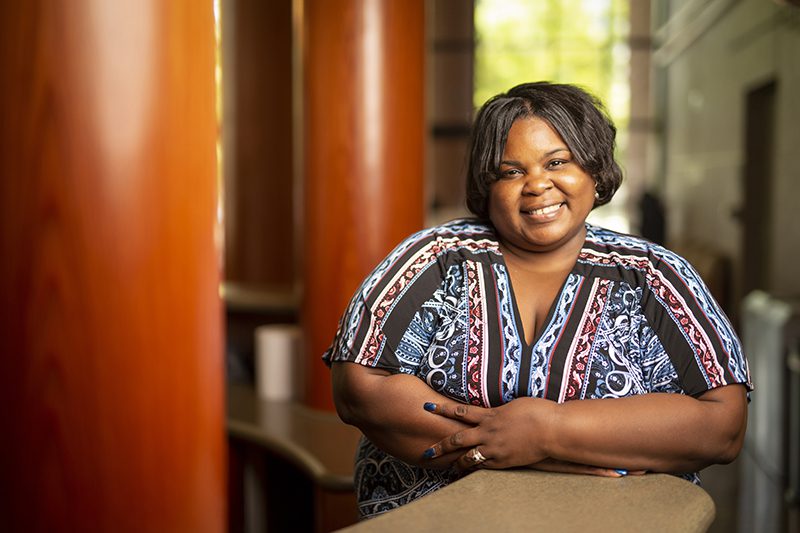 When Tonya McBride moved with her family to Nashville from Atlanta in 2003, it was for one reason — to be near Monroe Carell Jr. Children’s Hospital at Vanderbilt.

“My oldest son Xaiver was diagnosed with asthma at 6 months old,” McBride said. “He stayed with my grandparents one summer, and he got sick. They came here to Children’s Hospital where he received the very best care. I wanted to be closer so he could continue to get that care. Also, the compassion of the nursing staff and doctors at Vanderbilt made me want to seek a career here. I wanted to show that same concern to other patients that they had shown my son and my family.”

Xaiver unfortunately passed away five years ago at age 20, just before McBride began a new job with VUMC’s Nutrition Services, but her employment at the Medical Center is a tribute to his memory.

“I’m here doing what my son wanted me to do, so that makes a big difference for me,” she said.

In her first job at VUMC, she looked forward to visiting with patients and their families when she delivered meals each day, McBride said, and within just nine months, she was promoted to kitchen supervisor. Since October 2016 she has worked in the Department of Radiation Oncology as a patient service specialist.

“I’d been going to school to obtain my associate’s degree in health care management, and I wanted to work in a clinical atmosphere to coincide with my degree,” McBride said. “I graduated in December 2017. The most rewarding part of my job now is being able to talk to my patients, put them at ease and try to make their journey with cancer just a little bit easier.”

In recognition of the many ways she makes patients’ visits better, McBride was presented a Credo Award at the August Leadership Assembly by Lisa Kachnic, MD, chair of the Department of the Radiation Oncology.

“My grandparents were my role models, and they instilled in me from a very young age that you need to be kind to everyone and treat others the way you would want to be treated. I don’t know any other way.”

In the nomination letter for McBride’s Credo Award, Rachel Conklin, MMS, PA-C, wrote in part: “My patients often report to me feeling recognized, appreciated, heard and reassured after interacting with Tonya. Many enter our office for the first time with a new cancer diagnosis, fearful, concerned about the road ahead, and anxious. Tonya is able to immediately provide reassurance to them, letting them know that their care will be thoughtfully coordinated, and that she is present and able to serve their needs at any step along the way.”

McBride doesn’t think anything of it; that’s just how she was raised, she says. “My grandparents were my role models, and they instilled in me from a very young age that you need to be kind to everyone and treat others the way you would want to be treated. I don’t know any other way.”

McBride said her biggest joy is taking care of her family and spending every possible moment with her seven surviving children, seven grandchildren(with two more on the way), and her husband Deron, who works for Vanderbilt University Plant Operations.

The family’s favorite pastime is seeing movies, with movie date night for Mom and Dad on Saturdays and family movie outings on Sundays. The crew even loaded in the car to visit the famed Stardust Drive-in Theatre just over an hour away from Nashville in Watertown, Tennessee, but “got super lost” on winding rural roads trying to find the movie complex.

That was quite a disappointment, McBride said, so now they’ve got directions printed out, ready for their next adventure.