Stephanie Hays’ own body destroyed her kidneys. Luckily, her daughter had a spare.

The operation was a success; Roni’s kidney began functioning in her mom right away. “Now she’s stuck with me forever,” Roni joked. 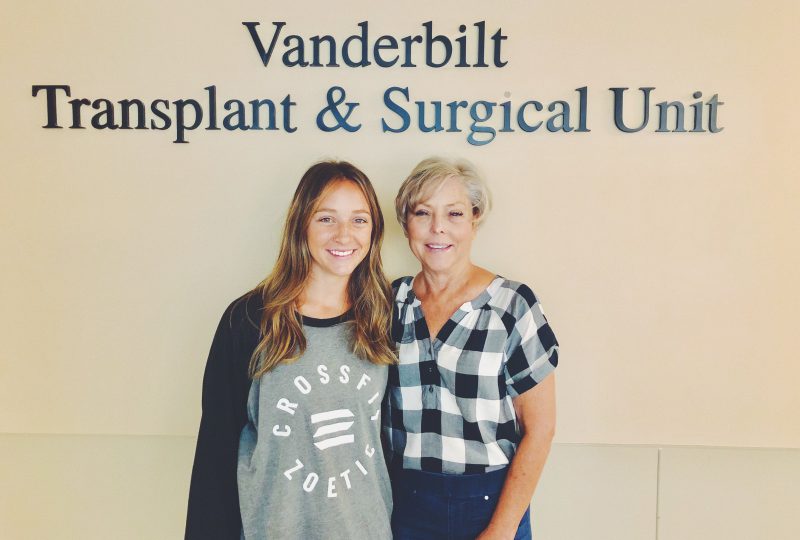 In 17 days in November 2017, Stephanie Hays went from being perfectly healthy to needing a new kidney.

Hays, director of Clinical Documentation Excellence for the Center for Health Information Management at VUMC, was diagnosed with Goodpasture syndrome, a rare autoimmune disorder discovered in 1919 by Ernest Goodpasture, MD, Vanderbilt University graduate and future dean of the School of Medicine.

The disease, which affects about one person in a million, causes the body to produce antibodies to attack its own lungs and kidneys.

Hays would spend the next 18 months on dialysis during the journey to receive a kidney transplant. During that time, she continued to work at Vanderbilt, receiving nine hours of peritoneal dialysis at home every night.

It all seemed so routine at first. Hays awoke one morning with shortness of breath and went to a grocery store walk-in clinic. The initial diagnosis was also pretty routine – pneumonia and a sinus infection. She was prescribed antibiotics.

But after days of no improvement and difficulty climbing stairs, she came to a Vanderbilt walk-in clinic. The news was worse – her blood pressure was 200 over 98 and after a chest X-ray, she was directed to go immediately to the Emergency Department, which she did, at Williamson Medical Center, where Chris Wilbeck, MD, a Vanderbilt-trained nephrologist, diagnosed her with Goodpasture syndrome. 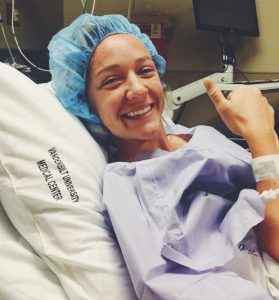 Roni Hays on the day she donated a kidney to her mother.

He “spotted it immediately and called me,” said Jamie Dwyer, MD, professor of Medicine and director of the Nephrology Clinical Trials Center. “He saved her life.”

Hays was transferred to VUMC, where doctors noted her kidneys were down to 7 percent function. “I think I was very close to dying,” she said. “It happened very, very fast.”

“In some cases, a lung infection or injury may actually trigger the disease to start,” Dwyer said. “One possibility is that a lung infection triggered the disease and that early shortness of breath was actually the causative infection. Another possibility is that the shortness of breath was her lungs’ response to the Goodpasture disease.”

Dwyer told Hays shortly after meeting her that she was going on dialysis until she could get a kidney transplant — at the earliest opportunity. “Her disease was so severe and so advanced by the time it was caught that her kidney recovery was hopeless,” he said. “We chose to focus on day one to plan for transplantation. We discussed donors as we discussed dialysis options.”

Hays would spend the next 18 months on dialysis during the journey to receive a kidney transplant. During that time, she continued to work at Vanderbilt, receiving nine hours of peritoneal dialysis at home every night. 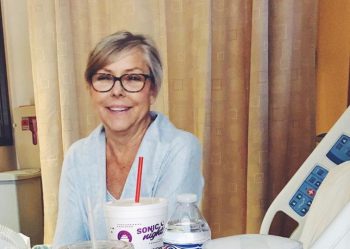 During that time, doctors monitored her to ensure that the antibodies that attacked her kidney had subsided before she could be placed on the transplant list. In October 2018, she got the green light.

Two of her daughters immediately stepped forward to be tested for compatibility for transplant. Her oldest daughter was declined by the transplant committee for medical reasons, but her youngest, Roni, 22, was accepted to be a donor.

Roni broke the good news to her mom in an unconventional fashion. At a restaurant celebrating her mom’s 60th birthday on April 15, Roni handed her mom a card with the good news inside.

Stephanie sat speechless, her mouth agape for several seconds. “When did you find out?” she finally managed to ask.

“I kind of knew it was going to be me anyways,” Roni later recalled. “My mom and I are like the same person” — same sense of humor, same taste in TV shows, same taste in music. It’s not uncommon for the two to go to concerts together.

Stephanie, who has been with Vanderbilt since 2002, praised her medical team and coworkers who have pitched in for her during her medical leave.

“We’re just best friends,” she said. “We do everything together.”

It just so happened that Roni was about to graduate from Belmont University in May with a degree in Exercise Science. Her graduate studies to become a physical therapist at University of Tennessee-Chattanooga wouldn’t begin until the fall semester.

In between, she had time to donate a kidney and recover alongside her mom. The weekend before their surgery, mother and daughter watched Eric Church in concert. May 28 was the day of the transplant, when Roni was wheeled down the hallway of the Vanderbilt Transplant Center to a cheering crowd of medical personnel.

The operation was a success; Roni’s kidney began functioning in her mom right away.

For Roni, the operation meant slowing down a little bit. She regularly spent three hours a day at the gym. One month after the operation, she was back at the gym slowly ramping up her routine. She said she feels about the same as she did before the surgery.

“I feel like it was really not that big a deal,” she said. “As long as you take care of yourself and take care of your body you’ll be fine. It’s a small operation that makes a big difference.”

Stephanie, who has been with Vanderbilt since 2002, praised her medical team and coworkers who have pitched in for her during her medical leave.

“My nurses were awesome, absolutely awesome,” she said. “My care was awesome. My doctors were awesome. Vanderbilt has done a lot for me personally.”

“We were given two kidneys for a reason,” Roni posted on her Facebook page about a month after the life-giving surgery, “One for ourselves and another to give to someone who needs it.”