Taking pride in his work, spreading joy among those he meets

“Round Wing In-Patient Unit is my castle and I make rounds like a doctor to make sure those floors are clean,” Environmental Services' Labronze Floyd says. 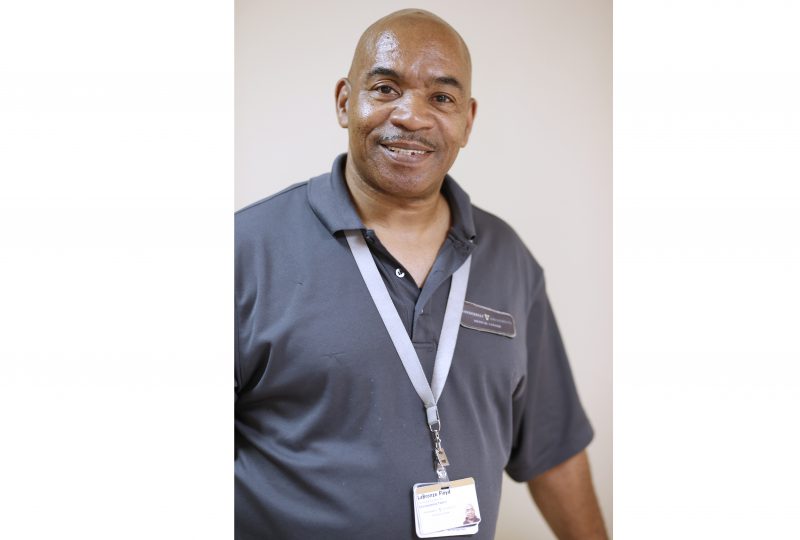 With joy, he can describe in detail his process of cleaning the patient rooms, corridors and hallways of VUMC’s Round Wing with his meticulous mopping, dusting and buffing.

Floyd, 56, who years ago picked up the nickname “Pink” after the British rock band, has worked in the Environmental Services Department at VUMC for more than a year and in that time has forged a reputation for going above and beyond to create a comfortable and clean setting for patients, their family members and staff.

“Round Wing In-Patient Unit is my castle and I make rounds like a doctor to make sure those floors are clean,” Floyd said with pride. “I try to make the job pleasing and I really like to make people’s day. I love to joke and be happy.”

“My job is to make patients feel comfortable in this hospital, and whether it’s telling a joke and making them laugh or encouraging them, I want to go above and beyond to do it.”

Known for his outgoing personality as well as his work ethic, he’s not shy about sharing the story of his life to show others that overcoming adversity is possible.

“I tell my story because people may be down about being sick and being in the hospital,” Floyd said. “I tell them we get to be here and live. I want them to know they can conquer it. I hope they look at my story and it gives them hope to not give up, not to quit.”

The pride Floyd takes in his work is evident. Photo by Steve Green

He readily shows the scars on his wrists, healed long ago but still visible, as a vivid illustration of what hitting rock bottom can look like, before he completes the arc of the narrative: “God gave me a second chance and made my life better. When you get a blessing, you should share that blessing.

“The patients are number one and the impression we make is very important,” he said. “My job is to make them feel comfortable in this hospital, and whether it’s telling a joke and making them laugh or encouraging them, I want to go above and beyond to do it.”

Those who work beside him notice his gumption and vigor to accomplish that.

“Making the patients smile every day is important to Labronze,” said Marcus Jordan, director of Environmental Services at VUMC. “He interacts with the unit staff, the nurses and the team, and they really love him. It’s a really good partnership between Labronze and the patients and staff at Medical Center North.”

Floyd has had to work through what his mother, Theresa Fisher, describes as a form of autism and a learning disability that created a struggle with literacy and writing. In addition, he’s overcome mental health difficulties and substance abuse.

“It’s so many things he dealt with,” she said. “He had a learning disability, but he never gave up.  He’s taught himself so much and he’s such a loveable person. Although the chips were stacked against him and he’s gone through so many struggles, he continues to work hard to succeed.”

Fisher, who Floyd affectionally calls “Queen T,” said he is the oldest of her four children and she worked hard to help him overcome his struggles through childhood and adulthood.

As a youth, Floyd had anger issues and struggled with social interactions with others, she said. He was different and bullied for it.

“I’ve always had faith in God and in my momma,” Floyd said. “She taught me that words couldn’t hurt me, and she helped make me stronger. I love what my momma taught me and that’s to be independent.”

“My mom never gave up on me. A lot of people gave up on me and I even gave up on myself several times, but she didn’t, and I’ve been able to overcome things and learn from my mistakes.”

Floyd learned to clean from Fisher, who cleaned other people’s homes when he was a child.

“When you can’t read or write, it’s something that comes so natural and I’ve done it for so long,” Floyd said.

He said he ran from his demons for years and overcame a lot. He gives credit to where he is in life now to God and his mom.

“My mom never gave up on me. A lot of people gave up on me and I even gave up on myself several times, but she didn’t, and I’ve been able to overcome things and learn from my mistakes,” he said.

His mother is proud of his progress including his stable employment at VUMC and the pride he takes in doing his job and helping others.

“He is one of the most loving and giving people I know,” Fisher said. “He’s forgiving and he’s just a wonderful person. I’m proud of that boy.”

“He’s very friendly and helpful,” said Sharon Seats, a discharge planner who has worked at VUMC for 13 years. “He’s a cool person and he’s always willing to help.”

“I want to go above and beyond in what I do,” Floyd said. “I believe helping out is being a team player and I will help anyone: the nurses, the housekeepers and even family if they are lost. I’ll take them where they need to go. I just want them to be comfortable.”

A plaque naming him Employee of the Month in June 2018, hangs behind the nurses’ station on the fourth floor of the Round Wing. He’s been ‘adopted’ as an honorary nursing staff member and is invited to potluck meals and team gatherings. He brings lunch to share with the staff almost weekly.

“Labronze has had his battles and he’s battled back,” said Jordan, his supervisor. “I encourage him and let him know someone believes in him and he’s doing very good work here at Medical Center North. He’s the employee who will jump in and help without asking. We really are glad he’s on our team.” 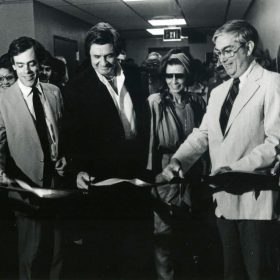 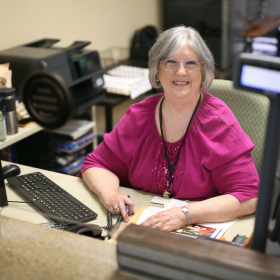 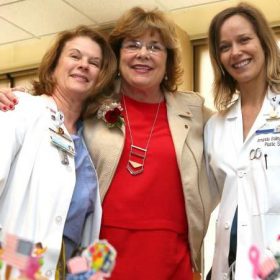 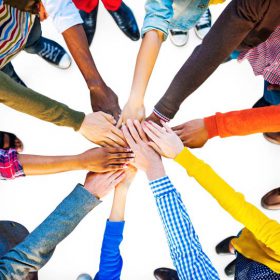