Ten years ago, Mike Lavin was saved by a bone marrow transplant. A few days ago, he paid a surprise visit to the donor who made it possible.

“I really appreciate everything you have done. I’m here because of you.” 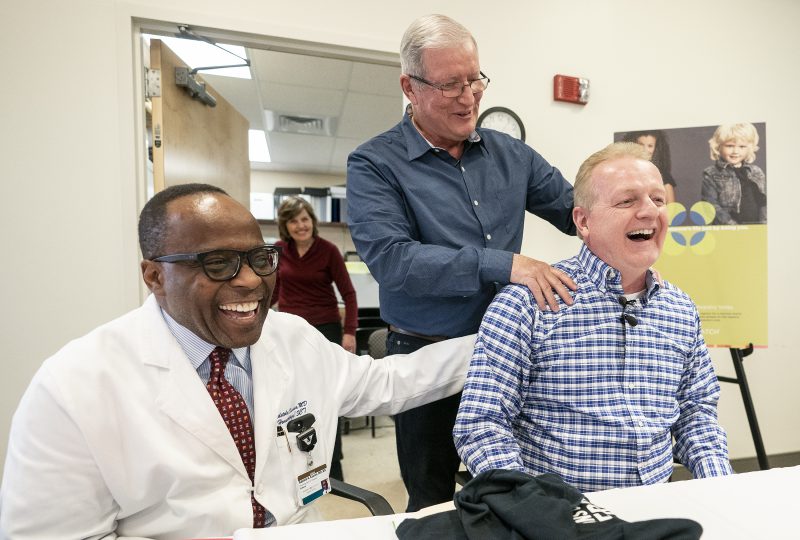 His donor, Mike Baxter of Smyrna, Tennessee, came to VICC for what he thought was the taping of a public service announcement for Be the Match, the National Marrow Donor Program. Lavin hid in a storage closet behind Baxter as he spoke, then walked out and gave him a hearty pat on the back. Baxter turned, briefly covered his face in astonishment and then offered a handshake. Lavin gave him a hug instead.

“I really appreciate everything you have done,” Lavin said. “I’m here because of you.”

Baxter’s family and Lavin worked closely with VICC Stem Cell Transplant to orchestrate the surprise encounter. Lavin listed memories from the past 10 years that Baxter’s bone marrow donation made possible.

From left are husband and wife Mary and Michael Lavin, with the Baxter family Mike Baxter, Brandon Baxter, son, and Julie Baxter during a surprise visit to Vanderbilt. Photo by Joe Howell

Lavin received the stem cell transplant in 2009, after suffering a relapse of mantel cell lymphoma, a form of blood cancer that seven-and-a-half years earlier had gone into remission after multiple rounds of chemotherapy and radiation treatment. When the cancer returned, it was at stage 3, having spread to his neck and abdomen. He again underwent multiple rounds of chemotherapy and radiation therapy, which put the cancer back into remission, but he needed a stem cell transplant for a chance at a lasting cure.

Baxter had been on the registry of the National Marrow Donor Program for several years before being matched with Lavin. He got on the registry during a Be the Match promotional event held at his church.

“Sometimes when I try to explain to people about Be the Match, I see blank stares,” Baxter said. “I want to do everything I can to make them understand that it’s an easy thing. You go through this process and if you’re lucky enough to be selected, you’re given this opportunity to help someone in an extraordinary way.”

Although Baxter and Lavin had never met until the surprise encounter, they had communicated. In the United States, a stem cell donor and recipient must wait one year before sharing any identifying information. The two men had communicated through social media, and so had their families. Baxter’s wife, Julie Baxter, reached out to Polly Keith, a National Marrow Donor Program coordinator at Vanderbilt, about setting up the surprise meeting. His son, Brandon Baxter, a pharmacy intern at Monroe Carell Jr. Children’s Hospital at Vanderbilt, approached him about being in a public service announcement and got his father to agree.

Lavin traveled to Nashville with his wife, Mary, who hid in the storage closet with him. After the two men met, their families spent time together over the weekend dining and sightseeing in Nashville.

He now has more experiences he can add to the list of memories made as a longtime cancer survivor. If Lavin, who is Caucasian, had been a different ethnic group, he might not have been so fortunate. Matches are determined based on human leukocyte antigen (HLA) typing and are used to match patients and donors for bone marrow transplants. HLA are proteins or markers found on most cells in the body that the immune system uses to recognize which cells belong in the body and which don’t. HLA are largely determined based on hereditary factors, such as race and vary based on family lineages. 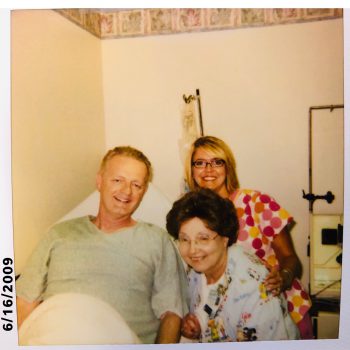 Since more Caucasians are signed up on the registry, those needing stem cell transplants are more likely to be matched compared to people from other ethnic groups. For patients without a suitable related HLA-matched donor, unrelated-donor registries of adult volunteers, such as the Be the Match Registry operated by the National Marrow Donor Program, provide potential sources of donors.

“We encourage more ethnic minority representation on the registry to improve the likelihood that an ethnic minority will have a suitable donor,” said Adetola Kassim, MD, MS, interim director of the Vanderbilt Stem Cell Transplant and Cellular Therapy Program.