The "proud Vanderbilt nurse's" life's work, and her passion, are the patients and the employees of MICU. 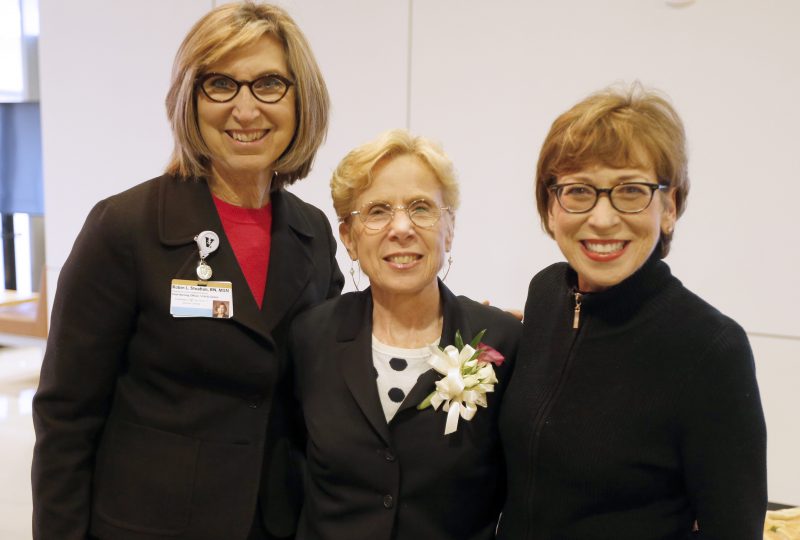 When Julie Foss came to Vanderbilt in 1979, she knew exactly where she wanted to work – the Medical Intensive Care Unit (MICU).

Except for some brief stints in other areas, she has worked in MICU ever since.

Foss, MSN, RN, NE-BC, retired in February after managing the MICU at Vanderbilt University Adult Hospital for nearly 30 years, a job on a high-stress unit that she never tired of.

“I love the challenge of it,” Foss said. “We see such a variety of different patient populations and different diseases and conditions and even after 29 and a half years of being a manager there, when I listen to report in the morning, there are new things.”

“Critical care at Vanderbilt is really different than it was in the 1980s. One thing has been really constant and that is Julie’s leadership to help nurses, young residents, doctors, nursing leaders and administrators know how to do the right thing for the people that we serve.”— Marilyn Dubree, Executive Chief Nursing Officer.

Foss’ passion for nursing goes back to her teenage years growing up in Waterloo, Iowa.

“My mom and my grandmother always talked about me being a nurse and they thought that that would be a really cool thing for me to do,” she said. “When I was in junior high, I started to work as a candy striper and did that for four hours almost every Saturday. During that time I just really realized that I liked being in the hospital. I liked working with people and maybe making their day a little bit better.”

From Waterloo, she went to a three-year hospital diploma program at Iowa Methodist Medical Center in Des Moines, Iowa, then to Luther Hospital in Eau Claire, Wisconsin. She realized that she needed more education, so she moved to the University of Iowa to get her Bachelor of Science degree in nursing (BSN), and set her sights on warmer climates to get her graduate degree. An internist she had worked with in Waterloo suggested Vanderbilt, citing the research underway in hypertension and cardiovascular diseases.

By then, Foss had fallen in love with medical intensive care, which she traces to one night at the University of Iowa Hospitals when she was temporarily assigned to work there. “Even though I had been a CCU nurse before, it was just something about the MICU,” she said. “When I came [to Vanderbilt] to interview, I was specifically looking for an MICU because that became my new passion.”

MICU at Vanderbilt was a little different then. Foss’s first workplace was the B-3100 area in the old Vanderbilt Hospital, now Medical Center North. There were six ICU beds — five of them in one room and one private room.

Over her career, she has grown up with the unit, which is now in Vanderbilt University Adult Hospital and has 35 beds.

“Critical care at Vanderbilt is really different than it was in the 1980s,” said Marilyn Dubree, MSN, RN, NE-BC, Executive Chief Nursing Officer. “One thing has been really constant and that is Julie’s leadership to help nurses, young residents, doctors, nursing leaders and administrators know how to do the right thing for the people that we serve.

“From the bottom of our heart we appreciate you so much. Thank you so much; you have touched so many lives.”

Foss makes no bones about it — the work has been hard. She grew in appreciation for being at a patient’s and family’s side through their most turbulent episodes of life, which sometimes ended in saving the patient, and sometimes not.

“It’s the manager who creates a culture and sets a tone of excellence in patient care, for collaboration and for staff involvement in decision making. Julie has done all of this,” said Robin Steaban, MSN, RN, Chief Nursing Officer for Vanderbilt University Adult Hospital and Clinics. “She has been uncompromising in expecting nursing and medical teams to deliver extraordinary patient care. This is consistently demonstrated by the outcomes of care in the MICU.”

The team is what makes it possible.

“The staff on the unit talk about how I’m the glue that holds them all together, and it so isn’t true,” Foss said. “It truly takes everybody.

Foss has a lot on her “retirement bucket list.” One of the top items is to adopt a dog. She wants to travel to see family, all of whom live out-of-state. She will knit with her close circle of friends and continue going to her book club. And there is lots of volunteer work she plans to do.

But there is one title that will never change.

“I’m very, very proud to call myself a Vanderbilt nurse,” she said.