Reid Longmuir was starting a new job. He thought he would be learning the names of his co-workers. Instead, he was learning more basic things, like how to walk. 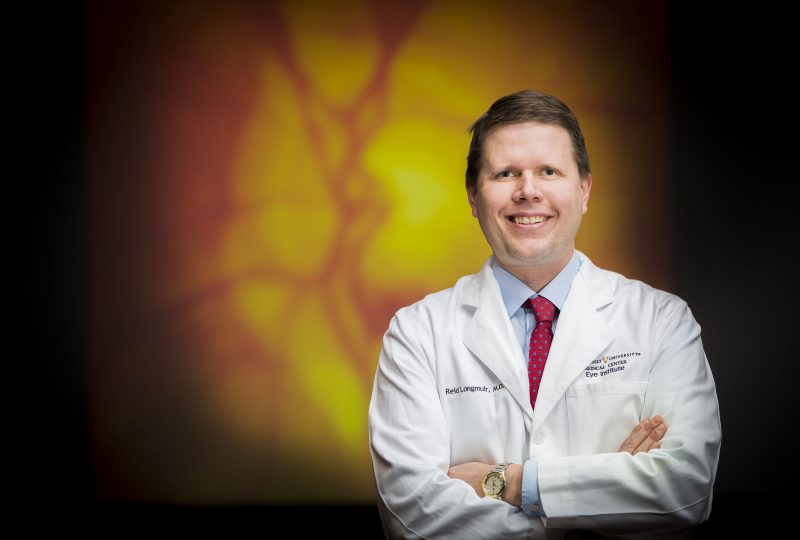 Reid Longmuir, MD, at the Vanderbilt Eye Institute. After a viral illness, he had to learn to walk, eat, and get out of bed again. Photo by Susan Urmy

Reid Longmuir, MD, was planning for a busy week, full of new things.

He was scheduled to start a new job on the faculty at the Vanderbilt Eye Institute (VEI), and, like any new employee, he had expected to be learning the ropes — where to park, where to eat lunch, the names of his co-workers.

The way it worked out, he was instead busy learning other things – how to eat, how to walk, how to get out of bed.

“It was a tough and tedious recovery. It was frustrating that I was not getting better fast enough.”

It was 2014 and Longmuir had accepted an exciting new job at Vanderbilt. But in the months before the planned move from Iowa City to Nashville in September of that year, he was diagnosed with adenoviral meningoencephalitis, a virus-borne inflammation of the protective membranes surrounding the brain and spinal cord.

He spent a month in the ICU at the University of Iowa Hospital and three additional weeks at the hospital before transferring to a rehabilitation facility in nearby Cedar Rapids for three more weeks of intense therapy.

Longmuir counts himself among one of the lucky ones. His improvement from the disease was gradual, a yearlong rehabilitation, but he did not experience any permanent damage. He says he learned that not all improvement is measurable.

He recalls the angst he felt when he was first placed in a wheelchair. It was still unclear whether he would walk again.

“Every day when my therapists came to work with me, I was so motivated,” he said. “I wanted to walk. I wanted to see some evidence that there was some improvement, even if I was not able to physically walk yet.

“It was a tough and tedious recovery. It was frustrating that I was not getting better fast enough.”

But over time and with determination, he did get better, and was finally was able to move to Tennessee with his wife, Vanderbilt undergraduate and medical graduate Susannah Quisling Longmuir, MD, and their children, and start working at VUMC in July 2015. A little later than expected, but sometimes learning to walk takes time.

The neuro-ophthalmologist and glaucoma specialist said his diagnosis and recovery gave him a fresh outlook on his interaction with his own patients.

“I learned how to be a better patient as well as a better physician.”

“Where it really comes into play is when I see a patient who has undergone or suffered some significant neurological problem, like a stroke or post tumor resection who is now debilitated in some way.

“I now can better relate to my patients who are in this recovery mode. Now that I have experienced much of the recovery and testing processes that many of my patients must endure, I can truly empathize and encourage them. It’s really easy to become impatient with recovery and it’s stressful.”

That hard year of recovery taught Longmuir valuable lessons he hopes to pass along to others – seeing patients through a different lens.

“I discovered that it’s so important to find out what the patient and family want to accomplish because they are so much more than their illness,” he said. “Talking about goals during and after their illness is key to helping them navigate the recovery. It’s also important to really listen to how a patient is feeling.”

Another perspective he was able to glean from his time as a patient: being friendly to the medical team matters.

“Nurses and physicians work very hard,” said Longmuir. “And understanding that as a patient influenced my care in a positive way. The patient-provider relationship is a two-way street and I learned how to be a better patient as well as a better physician.” 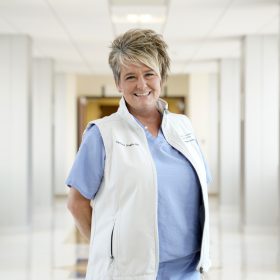 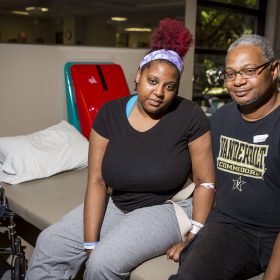