It was the early days of the COVID-19 pandemic, and Frank Nix, a medical receptionist with the Neonatal Intensive Care Unit (NICU) at Monroe Carell Jr. Children’s Hospital at Vanderbilt, had to begin wearing a mask at work.

“I wore the ones from the unit and at the end of my shift my ears were always really sore,” he said. “It took a lot of getting used to.”

“I discovered that they were conversation starters,” Nix said. “I was determined to make [mask-wearing] enjoyable, not only for myself but for all of those I meet while working in the NICU.”

But maybe even more than the discomfort, Nix discovered another issue with the face covering.

His job requires a lot of sensitivity to others, especially to the families of the fragile babies in his unit. And he quickly noticed that when everyone is wearing a mask, he couldn’t see the expressions on their faces, and they couldn’t see his. He wasn’t certain if someone was having a bad day and needed encouragement or was having a good day that merited a thumbs up.

Nix found a way to make the best of his new accessory and credits his wife, Reenie, a care partner in the NICU, as a big part of the solution: she started making masks for him to wear.

He liked Reenie’s masks better than the off-the-shelf ones in the unit, but he discovered something else.

“I discovered that they were conversation starters,” Nix said. “I was determined to make [mask-wearing] enjoyable, not only for myself but for all of those I meet while working in the NICU.”

He discovered that, even when everyone’s faces were covered, his unusual masks were a way to build back some of the connection that was otherwise lost.

The first custom mask he sported was the American flag and the second one featured little hand prints.

“I got a lot of comments the first day about how people like it,” he said. “Then the second day more people showed interest in my mask and I thought, ‘this isn’t so bad.’

“I may have dreaded it in the beginning, but it became an extra way for me to spread something positive along this unusual journey.”

“I started thinking — I had been in the ministry for 25 plus years and my own daughter was a NICU baby in another state and I really relate to our families — my masks were allowing them to open up and share. I noticed people began to chat and open their hearts.

“I was determined to make my masks enjoyable for me and for all of those around me,” Nix said. “I may have dreaded it in the beginning, but it became an extra way for me to spread something positive along this unusual journey.”

Nix isn’t sure how many masks he has at his disposal, but it is certainly more than 50, including the new ones for 2021.

The positive responses led him to share photos of the masks on his Facebook page along with stories of encouragement.

“The more stories I posted, the more people responded,” he said. “None of us really like wearing the masks, but it’s now become a part of my outfits. I can’t get dressed without a mask.

“The really neat thing is that these have created an opportunity for discussion and interaction. It just opens a door. With the help of my wife, Reenie, I was able to turn something I had to do into something positive and fun.

“And if I can help someone, on some level, then I feel like I’ve done good for the day.”

VUMC masks are subject to the workplace dress code; the guidelines are here. 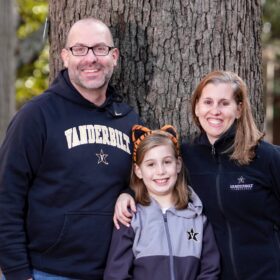