Olivia Neufelder sang from her heart to her dying patient, and millions of people all over the world shared the video. Here's the story behind the song, and what the 24-year-old Vanderbilt nurse's reaction has been to her fame. 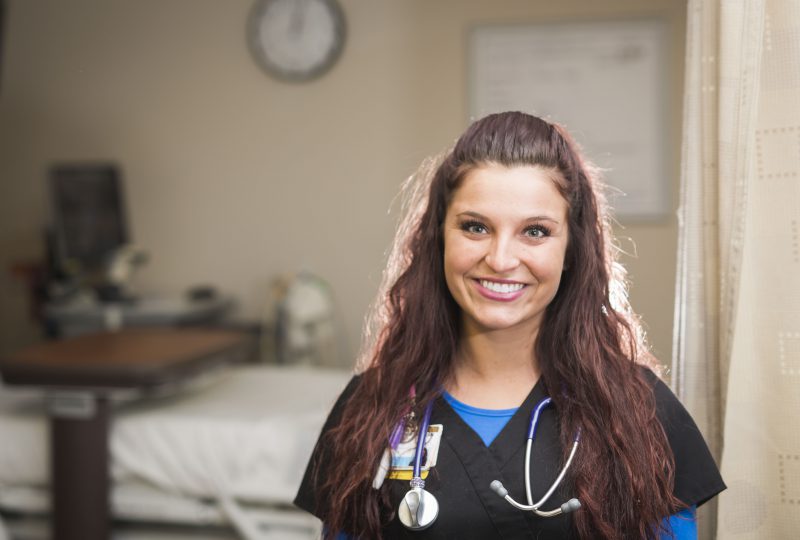 For at least a few days, VUMC’s Olivia Neufelder was quite possibly the most famous nurse in the world.

Neufelder, RN, BSN, warmed the hearts of millions and emptied tissue boxes around the globe when a video of her singing to a dying patient in October 2017 went — and continues to be — viral.

The simple act of compassion was captured on a video that has been viewed more than 50 million times.

In the video, Neufelder sings “Dancing in the Sky,” a soulful ballad by the duo Dani and Lizzy about life in heaven, to Margaret Smith, a patient with liver cancer who had just learned she wasn’t well enough to receive a liver transplant. Smith died about a week later.

The video was recorded and posted to social media by Smith’s friend, Crystal Roberts, and shared by, among many others, Smith’s daughter, Megan.

The level of celebrity that Neufelder, 24, achieved overnight is hard for anybody, especially her, to comprehend. She still receives requests for media interviews and daily Facebook messages from all over the world — Poland, Brazil, England, Japan and elsewhere — thousands of them, more than she can possibly answer. She even received a birthday card from a stranger in Singapore, and she receives invitations from other patients’ families to sing.

At heart, most of the messages to her come down to this: “Thank you for being compassionate.”

Despite the fact that Neufelder’s singing has had worldwide exposure that most professional singers can only dream of, she did not move to Nashville with her sights set on becoming a singer — she moved to Nashville in hopes of becoming a Vanderbilt nurse.

Neufelder seems taken aback by the idea of being thanked for being compassionate.

“I wish that what I did wasn’t out of the ordinary,” she says. “I wish everyone was able to show compassion and that this world wasn’t so sad that a video of someone being compassionate would take off around the world.

“I am glad the video has helped so many. A lot of the stories I get are of people who have recently lost a loved one; and for some of them the song had also been their loved one’s favorite. They have been able to find peace in their loved one passing through the video in some way or another. Everyone has a slightly different take on it.”

Last October, during one of her shifts on the Surgical and Transplant Unit in the VUMC Critical Care Tower, Neufelder noticed that Smith, whom she called Miss Margaret, seemed particularly fearful that day.

To cheer her up, she asked Smith to name her favorite song, and she said “Dancing in the Sky.”

Neufelder had never heard of it, but she looked up the words and began learning them. One verse, speaking to a loved one in heaven, asks, “Are your days filled with love and light?/Is there music?/Is there art and invention?/Tell me are you happy?/Are you more alive?”

Singing the song together became Neufelder and Smith’s bedside ritual. They would join together on the chorus: “I hope you’re dancing in the sky/ And I hope you’re singing in the angel’s choir/ And I hope the angels know what they have/ I bet it’s so nice up in heaven since you arrived.”

“With every patient, you have to adjust how you communicate with them. Every family is so different from the next,” she says.

On that day, when Miss Margaret had received bad news, they sang together, and Smith’s friend Crystal Roberts recorded it and posted the video to her Facebook page. The next thing Neufelder knew, she was getting messages from all over the world.

Neufelder’s singing career was limited to school plays and choir, and she describes her voice as “a sing-in-the-shower-kind-of-voice.”

Neufelder also shared and sang her favorite song for Smith — Sarah’s McLachlan’s “Angel.” In one instance where she sings it to Smith, she says, a passerby stopped by the room to listen. Embarrassed, she stopped.

So on that day, when Miss Margaret had received bad news, they sang together, and Smith’s friend Crystal Roberts recorded it and posted the video to her Facebook page.

The next thing Neufelder knew, she was getting messages from all over the world.

But the simple act of singing for Miss Margaret had roots in Neufelder’s past, in her relationship with her grandmother, whom she called Nana.

Singing for Nana, her first patient

For someone so young, Neufelder, a native of Granger, Indiana, has many years of patient care experience.

Her first job at 16 was as a patient care tech/nurse’s assistant in the float pool at a local hospital. At home she also took care of her Nana, Stephanie Heyde, who had congestive heart failure and Alzheimer’s. 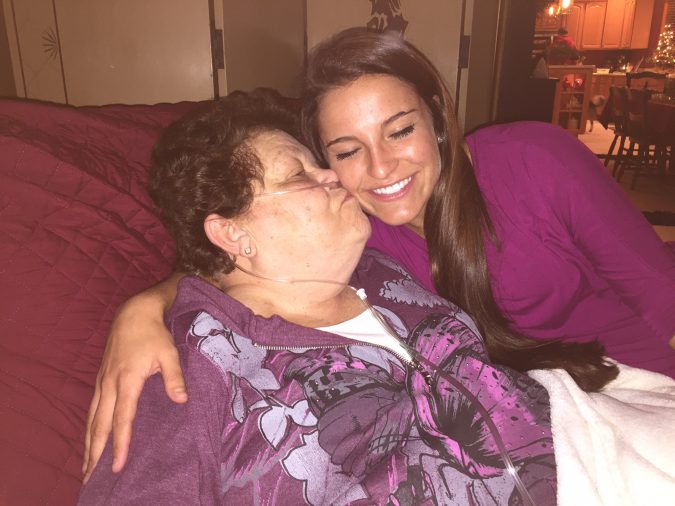 Olivia with her Nana, the first person who encouraged her to sing. Photo courtesy Olivia Neufelder

During Neufelder’s senior year of high school, she went to school for half-days and then took care of Nana the other half as part of a work-based internship in home healthcare.

“She had Alzheimer’s, but she remembered me,” Neufelder says. “I would always sing to her, take her shopping, do her little nails and spoil her. She was always a princess.”

Neufelder says the thing that really bonded her to Smith was the resemblance to her grandmother.

“Miss Margaret’s case and just Margaret herself reminded me so much of my Nana. It was like I was back with Nana, almost. There was just an instant connection and love I felt for Miss Margaret. I would take her outside in her wheelchair and I would sing to her. She would sing a little bit to me too. That reminded me of Nana, because she also liked to sing,” Neufelder says.

Her Nana’s favorite song was “Hallelujah,” the Leonard Cohen song that has been recorded by many artists. Neufelder recalled many times singing it to her.

“She told me one day in the car, ‘Olivia, I want you to sing this for me at my funeral.’ I said ‘No way, Nana — I would be way too sad. I am not standing up and singing at your funeral.’”

After high school, Neufelder attended Indiana University, where she completed her undergraduate and nursing degrees. On school breaks, she worked in labor and delivery at Memorial Hospital in South Bend, Indiana.

In February 2016, her senior year of college, she got the call her Nana would not live much longer. Neufelder immediately drove home, and was able to spend several hours with her grandmother before she died. When the end was near, Neufelder curled up with her Nana in her hospital bed, and sang “Hallelujah” to her.

And it turned out that Neufelder also sang it at her Nana’s funeral. “At the last second something came across me and I stood up and sang it for her.”

Despite the fact that Neufelder’s singing has had worldwide exposure that most professional singers can only dream of, she did not move to Nashville with her sights set on becoming a singer — she moved to Nashville in hopes of becoming a Vanderbilt nurse.

She focused on Vanderbilt University Medical Center’s Nurse Residency Program, a competitive program designed to help ease and support the transition from student nursing to working in a demanding clinical setting. She was accepted into the program and has worked at VUMC since August 2016. She works with surgical and transplant patients, sometimes a challenging and difficult job because the patients are often very sick.

Some days are harder than others. When a patient passes away, she allows herself a 10-minute cry, a prayer and a breather in the bathroom. But in the end, she knows she still has other patients who need her, who rely on her. She wants to be there for them.

“I knew it would be a fast-paced challenge for me. We don’t learn a lot about transplants in nursing school. I learn something new every day,” she says.

Some days are harder than others. When a patient passes away, she allows herself a 10-minute cry, a prayer and a breather in the bathroom. But in the end, she knows she still has other patients who need her, who rely on her. She wants to be there for them.

“There is a light — even when it seems like one week it’s all dark or you’re surrounded by a lot of death. I try to keep the light in my mind and know that it’s going to get better,” Neufelder says. “There are families that are also looking to you to help them through. That is rewarding in a sense to know you are able to help them with what is sometimes the hardest part of their life.”

Through it all, “Miss Margaret” and Nana are not far from her mind.

“Miss Margaret impacted my life in so many ways. [It has been] two years since my Nana passed, which has been exceptionally difficult on me. Through Margaret and the moments we shared I have been able to find peace and comfort in both of their passings.” 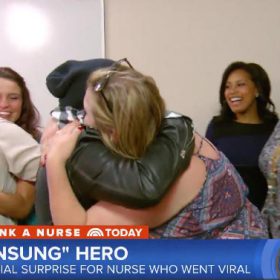