“I didn’t think many people noticed what we do, so it was nice to know someone noticed." 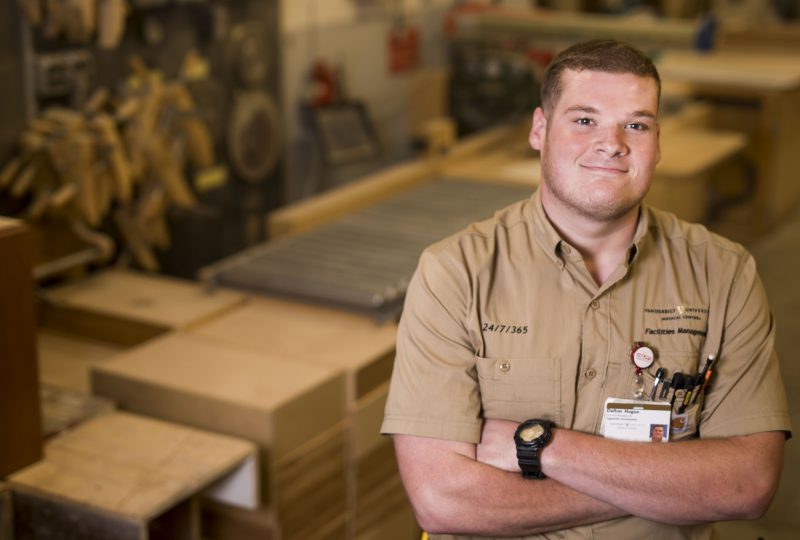 Broken locks, burned out lights, doors that stick — these are common annoyances we all deal with in our own homes, but on a large campus like Vanderbilt University Medical Center they can take on a new meaning. Keeping VUMC well-maintained is of critical importance to everyone who steps onto the campus, and as a Facilities Management carpenter, that is exactly what Dalton Hogue does. “We’re here for the patients, to help them have the best experience possible,” he said.

“Dalton is a very kind person. He always wants to deliver the best service possible to all our customers… he treats everyone with a sincere manner and a high level of interpersonal customer service.”

Hogue’s commitment to excellence and serving patients was recognized with a Credo award at the Aug. 14 Leadership Assembly.

“Dalton is a very kind person. He always wants to deliver the best service possible to all our customers… he treats everyone with a sincere manner and a high level of interpersonal customer service,” reads his nomination letter.

Hogue has worked at VUMC for almost two years. He started his career in construction before moving to a subcontracting company that did work for VUMC. It was during this time that Hogue’s commitment and passion for his work was noticed by Anna Rivera, manager of the Carpentry and Paint Shop in Facilities Management.

“When I hired Dalton, I knew of his work ethic as a contracted service employee,” Rivera said. “I gave him the opportunity to join my team internally because I saw the courteous and gentle manner in his personality and felt that he would shine in his role.”

As a carpenter, Hogue works all over the VUMC campus — from the Medical Arts Building to the Central Garage to the Oxford House. His job responsibilities range from fixing broken doors to building cabinets and everything in between.

“Our department is so hidden behind the scenes, with day-to-day challenges with maintaining such a large campus. We are often the unseen,” Rivera said.

Rivera, along with the entire carpentry team, is proud of Hogue’s recent award, and of the recognition it has brought to their department.

“It is such an awesome feeling to know that one of my employees shined in such a manner and had made a difference in someone’s life just by doing his job, enough so that someone spoke up to share their experience,” she said.  “I know my carpentry team is proud of Dalton and happy for representing. I truly believe the entire Facilities Management Department is proud as well. It is a wonderful award for Dalton, but it is also a wonderful award for us all to rejoice with him.”

Receiving this recognition has been a humbling experience for Hogue.

“I didn’t think many people noticed what we do, so it was nice to know someone not only noticed, but also took the time to nominate me for this award,” he said.

Hogue hopes that by shining a spotlight on him and his field, it will help him as he advances through his career.