Public recognition is not her thing. But she’s always reminding her staff of the difference they make. 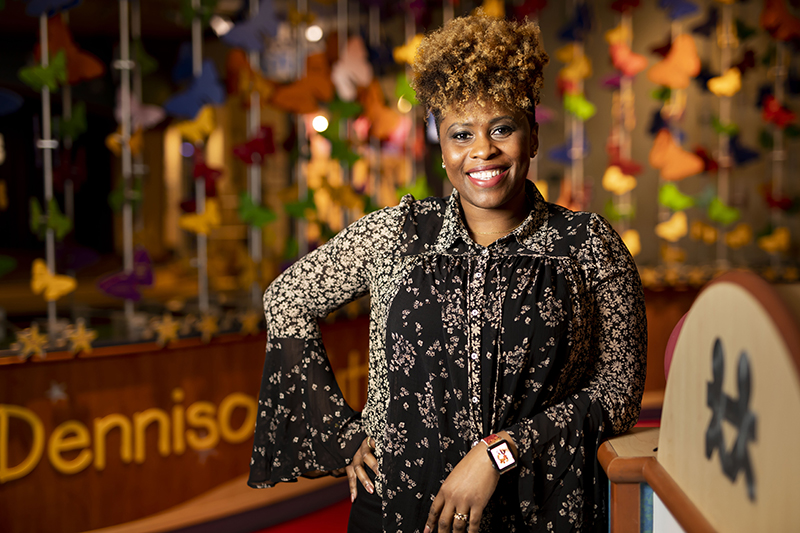 Not often does sharing news of an award for exemplary service start off with an apology.

But it’s perfect for Laresa Jackson, the technician coordinator for the inpatient pharmacy at Monroe Carell Jr. Children’s Hospital at Vanderbilt. Jackson received a Credo Award at the February Virtual Leadership Assembly.

While comfortable doling out inspiration, encouragement, kudos and the like, she’s not one who’s used to being celebrated for it.

“Our director came to get me and told me about the award,” said Jackson. “I’m not a public recognition person, so when she shared the news with me, she said, ‘I’m sorry for doing this, but you got the Credo Award.’

“I just told her that I was trying to work on that,” Jackson said, about learning to accept kudos and recognition.

“Our jobs are so important. No matter what is going on outside these walls or what we are going through, there is a greater purpose. We have to keep going for our patients and do the best we can every single day.”

The acknowledgement of Jackson is much deserved, according to her colleagues who submitted 11 Credo Award nominations on her behalf.

Highly regarded as a leader who is kind, caring, selfless, strong, dependable, approachable and motivating, Jackson said her mindset has always been that of a game changer.

“I always want to encourage people to do better and be better and see the limitless possibilities that exist,” said Jackson. “I look at myself as a game changer. Since we don’t work directly with patients and we are not able to see them when they go home or see the transformation of their healing, I am always reminding my staff that we have purpose and make a difference.

“Our jobs are so important. No matter what is going on outside these walls or what we are going through, there is a greater purpose. We have to keep going for our patients and do the best we can every single day.”

Jackson, a highly valued member of the Pharmacy team, has been a pharmacy technician for 17 years. She got her start in the retail arena and came to Vanderbilt nine years ago. She currently manages 19 people on the second and third shifts and loves the environment and people.

It is her sense of ownership, communication skills, commitment, confidence, respect of others and professionalism, all with a dash of humor and humility, that stand out to her peers.

Several nominations mentioned “A Moment of Focus,” an evening huddle created by Jackson to acknowledge and celebrate the wins in life of the staff members. The meetings set the tone for the group’s work environment.

“Laresa has provided her team a sense of relief during a time of anxiety and fear,” reads one nomination. “She inspires them to be patient, focus only on the day-to-day and to uplift one another during the challenging times.”

‘Our jobs are essential, but our teamwork is what is going to help us stay strong’ is a common mantra during the huddles, according to colleagues.

While ensuring that her team is engaged and supported, Jackson stays focused on personal goals too and is currently enrolled at Trevecca Nazarene University, pursuing a psychology degree.

Jackson and her husband, Brian Graham, an anesthesia technician at Children’s Hospital, have been married seven years. They met at work.

She enjoys weight-lifting and co-leading a women’s empowerment group called the Healing Tent.

“I’ve always wanted more in my life,” said Jackson. “It took until now to realize that I was standing in the midst of more. I am right where I need to be, and I am blessed by everything around me and the path that I am walking.”

If you are a VUMC employee, you can nominate a colleague for an Elevate Credo Award, Five Pillar Leader Award, or Team Award. Visit the Elevate website to fill out a nomination form. Employees demonstrate credo behaviors when: they make those they serve the highest priority; respect privacy and confidentiality; communicate effectively; conduct themselves professionally; have a sense of ownership; and are committed to their colleagues. Elevate award nominations are accepted year-round. If a nomination is received after the cut off for an award selection period, the nomination will be considered for the next period. VUMC Voice will post stories on each of the award winners in the weeks following their announcement