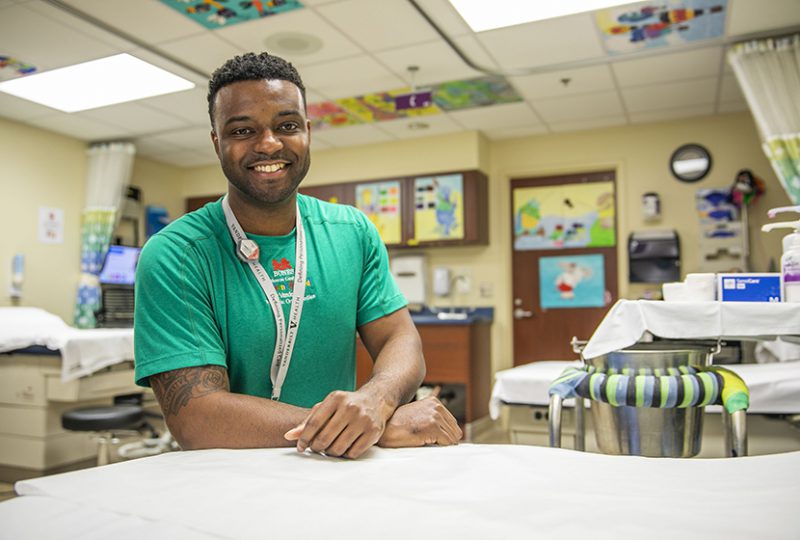 There’s a good chance if you see a child with a cast at Monroe Carell Jr. Children’s Hospital at Vanderbilt, it was carefully and lovingly applied by cast technician Nicholas Blackmon. He’s one of five technicians who handle all casting ordered by nine orthopaedic physicians and surgeons at Children’s Hospital and clinics in Murfreesboro and Hendersonville.

The casts range from the most common — for broken arms — to the least and most complex — full-body Spica and Risser casts for children with hip dysplasia, broken femurs, scoliosis and spine injuries. Those casts must be applied in the operating room.

Blackmon, originally from Huntsville, Alabama, has been at Children’s Hospital since 2011. He came here for a three-month externship and was offered a job upon completion. He was honored with a Credo Award at the Nov. 13 Leadership Assembly for his dedication, positivity and work ethic.

“There isn’t a task or case he isn’t willing to take on,” one nominator wrote. “He works professionally and confidently which puts our timid patients and their parents at ease.” Another commented on Blackmon’s “very warm, fun, spirited nature.”

Cast technicians do more than just cast applications in the clinic and operating room. They remove the casts, work with orthopaedic inpatients, do wound care, remove pins and sutures and staples and more. Blackmon estimates he sees about 80 patients a week.

“There isn’t a task or case he isn’t willing to take on. He works professionally and confidently which puts our timid patients and their parents at ease.”

“Nick always says, ‘it will be OK,’ and ‘we got this.’ For the days that are just head-spinning busy, he still has a smile on his face,” another nominator wrote.

Blackmon said the casting room stays full each day. “It can be really stressful getting to all the patients. You can get tired and fatigued on busy days,” he said. “I just keep telling everybody ‘you got this. We can get through this.’ We have a good team here.”

Injuries requiring casting can be seasonal, Blackmon said. “In the summer, we see lots of trampoline injuries. In the fall and winter, it’s more football and snowboarding.”

Casting can be challenging, depending on the age of the child, he said. “In the clinical setting, sometimes younger kids don’t understand,” he said, adding that the work of Child Life staff is essential in those situations. “They help tremendously in explaining what’s going on and helping put the child at ease,” he said. The OR setting is easier because the patient is asleep.

Blackmon, who is known for giving up PTO days to come in if the clinics are short-staffed, said that he forgot he was supposed to be on vacation one year and came in by mistake. “It was embarrassing,” he remembers. A colleague said in Blackmon’s nomination, “everyone got quite the giggle because that’s so Nick to come in and forget he even took PTO.”

He said his colleagues are more like family, adding, “I love the people I work with, the docs. I am super blessed to work here. The docs are amazing. They help us figure out goals and are anxious to see us succeed.”