Seven children of her own, thousands of children at work: Elizabeth Humphreys honored for her leadership of the Children’s Hospital pharmacy.

“A role model who always leads by example” 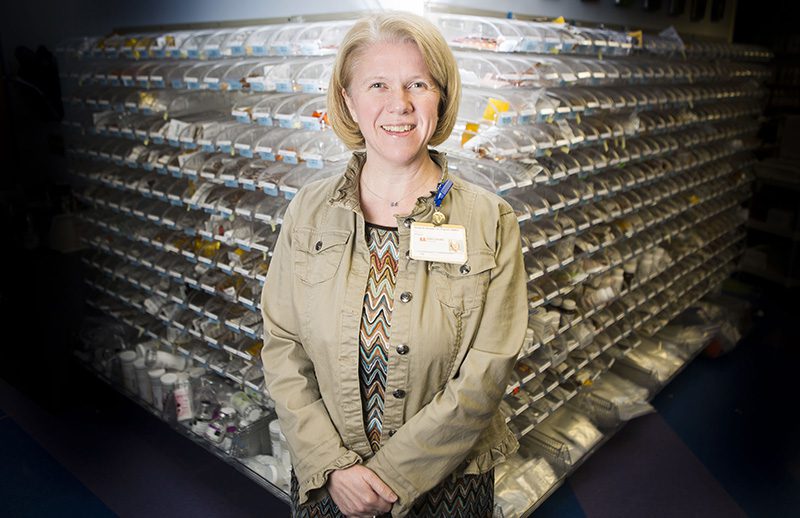 When Elizabeth Humphreys was a child she would often go to work with her father, a Memphis pharmacist. Sometimes he let her count out pills.

“He told me, ‘Elizabeth, do something meaningful with your life — something that means something to someone, including yourself.’”

She took his advice, became a pharmacist herself, and since 2009 has directed the Pharmacy at Monroe Carell Jr. Children’s Hospital at Vanderbilt, responsible for all inpatient, clinic and retail pharmacy operations at Children’s Hospital, direct supervision of the management team and indirect supervision about 100 pharmacy employees who handle the medication needs for the thousands of children who pass through the hospital and clinics each year — about 220 prescriptions a day in the retail outpatient pharmacy and 120,000 doses a month for inpatients.

Her life outside of the hospital is equally as busy. She and her husband, Mark, who works at VUMC as a program manager in the specialty pharmacy, have seven children, ranging in age from 6 to 22 – “one at every stage of life,” Humphreys said. Her oldest child, Austin, is married and works at VUMC in Health Information Technology. The youngest is in kindergarten.

“At the end of the day, I love being a pharmacist,” Humphreys said. “That’s what I’m passionate about. If I had to pick one of my roles, I’d be a pharmacist. No doubt about it. But being a pharmacist also enables me to make good decisions for my team and it helps me build relationships. I like to work side by side with my staff, drawing up medication. I want people to know me as more than just the leader of the department.”

Humphreys also has VUMC’s financial well-being in mind. She, along with other members of Children’s Hospital leadership and her team, helped save the Medical Center a substantial amount of money when they realized the waste from IV acetaminophen, packaged in adult-size doses but dispensed in pediatric-size doses. The unused medication had to be thrown away.  A close examination led to repackaging the medication into single doses, and the cost of the IV medication was decreased from more than $20,000 per month to less than $5,000 per month.

When the Children’s Hospital Pharmacy took over dispensing TPN (total parenteral nutrition), the feeding of a person intravenously, previously handled elsewhere in the Medical Center, she held Town Halls for staff across all shifts and implemented a staff suggestion box as well to address any concerns.

The nomination points out that Humphreys “never feels as though any task is beneath her…One day when our pharmacy buyer was out, we had nobody to unpack our drug order and place it on the shelf. Elizabeth jumped in and helped staff unpack and put up the order without any questions. She truly does lead by example,” the nomination read.

She also frequently helps out when there is a staffing need, serving as a staff pharmacist on evening shifts, one out of six weekends and occasional holidays, to ensure she does her share and remains up to date on practice and understands the roles of her staff. It’s not an imposition to fill the spots; it’s something she loves to do.

“At the end of the day, I love being a pharmacist,” Humphreys said. “That’s what I’m passionate about. If I had to pick one of my roles, I’d be a pharmacist. No doubt about it. But being a pharmacist also enables me to make good decisions for my team and it helps me build relationships. I like to work side by side with my staff, drawing up medication. I want people to know me as more than just the leader of the department.”

Being a pediatric pharmacist is challenging work, Humphreys said. “You have to manipulate more doses since most medication comes in adult-sized doses. We have tiny NICU babies and 4- and 5-year-olds who can’t take a tablet. Many of our patients are so sick. We have to do workarounds to make treatments for our patients. They’re not just little grownups.”

A graduate of University of Tennessee College of Pharmacy in Memphis, Humphreys also earned a Master of Management in Healthcare degree from Vanderbilt University in 2015.

Humphreys, a former competitive figure skater, said that she works hard to balance a demanding job with spending quality time with her family. Mark and her mother, Jane, who lives with them, have provided “incredible support.”

“My family is my priority. They always are. But when my job is pressing I have to make a decision. Do I miss an event with my family or take care of the issue at work?  I’ve had frank discussions with my children and they know my job affects a lot of sick children.  They’ve always been very receptive. They understand and they get it,” she said. 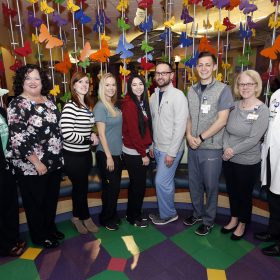