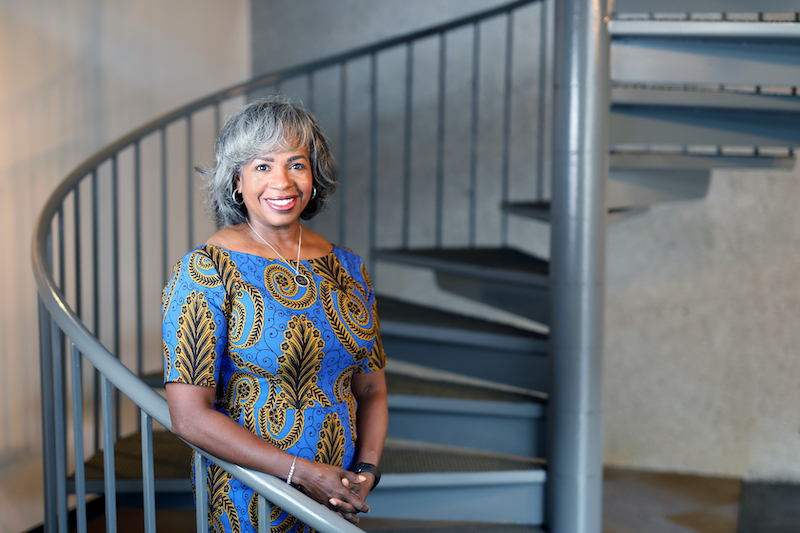 When Kristy Sinkfield listens, she hears the things that people are not saying.

As director of the Strategy and Innovation Office, Sinkfield has honed her ability to facilitate strategic planning discussions — and to take note of what’s being left unsaid.

“Unless the hidden viewpoints come out, there will be pitfalls,” Sinkfield said. “The more we can get people to say, the better off and more successful a project is going to be.”

Sinkfield was honored with the Five Pillar Leader Award at the August Leadership Assembly in recognition of her skillful strategy development and dedicated leadership of the Strategy and Innovation Office.

“We have a small team of really talented people who work together to leverage all of our strengths in order to help the organization accomplish changes that make a difference in the lives of patients and families,” Sinkfield said.

“In a strikingly collegial manner, Kristy is able to help divergent viewpoints find the unifying theme,” Paul Sternberg Jr., MD, Chief Medical Officer, wrote in the award nomination. “Her leadership soared during EpicLeap, where she was the ‘secret sauce’ for the success of the Operational Readiness Advisory Group.”

Sinkfield said she is humbled by the award.

“I was shocked, not only that I was nominated, but that I was selected,” she said. “It’s a wonderful surprise, and I am so grateful for all the people I’ve been able to work with.”

Sinkfield and the team she leads serve as internal consultants for long-term strategic planning across all levels of VUMC. They provide facilitated workshops, project management and one-on-one consulting.

“We’re good at helping people clearly define what they’re trying to do and figuring out the most effective and efficient ways to get that done,” Sinkfield said.

They excel at bringing the right people together to accomplish a goal, she said, and they prioritize building diverse teams.

“Kristy keeps her eyes open for potential leaders as she moves across levels of the organization,” Bill Stead, MD, Chief Strategy Officer, wrote in the nomination. “As groups of leaders discuss make-up of a task force, she reminds them that they are going back to the same well and advocates for reaching out to fresh voices.”

Sinkfield and her team are currently working with Consuelo Wilkins, MD, MSCI, and Elisa Friedman, MS, in the Office of Health Equity to put together the Racial Equity Task Force.

“I want VUMC to be successful in addressing the challenges of racism,” she said. “How are we, as an organization, going to be proactive; how are we going to demonstrate to the broader community what it means to change and grow, and what it means to be exemplars in the work that we do and who we are?”

Sinkfield is a native Nashvillian who graduated from Lipscomb University and flirted with law school before opting to pursue a master’s degree in education at Cambridge College in Cambridge, Massachusetts. She worked at VUMC in information management in the late 80s, went on to roles in higher education in South Carolina and then returned to a position at VUMC in the Human Research Protections Program (IRB). She has served as director of the Strategy and Innovation Office since 2007.

Outside of VUMC, Sinkfield is a certified spiritual director, and she and her husband, Antoni, are a doting “Gigi” and “Poptart” to three grandchildren.

“I like to feel that I spread joy and try to help people be successful and get things done. I’ve lived a good life,” she said.