Sarah Carpenter learned a lot working for “The Simpsons.” At Vanderbilt, she applies that knowledge to autism research.

“What I learned there — that’s what we’re doing here.” 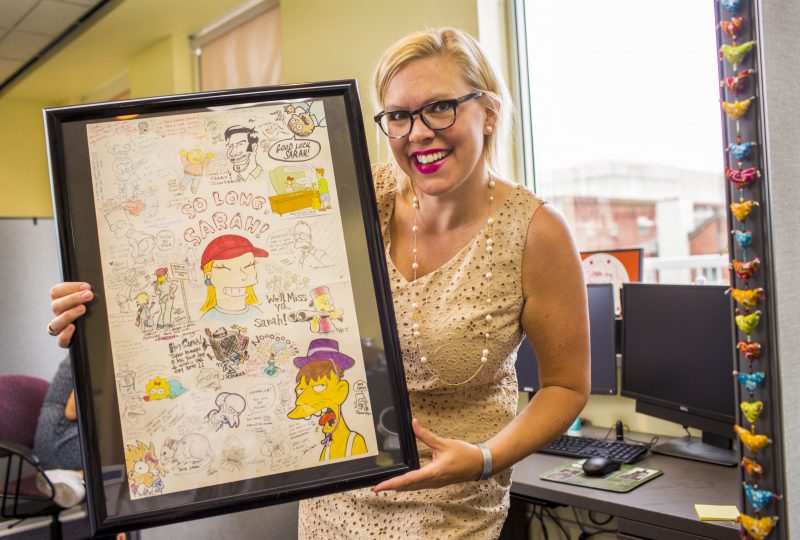 Sarah Carpenter worked for three years on “The Simpsons,” contributing to 72 episodes, some of which won Emmy Awards. When she left the show, her coworkers presented her with a personalized farewell poster. Photo by Anne Rayner

Sarah Carpenter spends her days working on the SPARK study, the largest genetic study of autism in the country of which Vanderbilt is one of the most active centers.

Led by Zachary Warren, PhD, associate professor of Pediatrics and executive director of the Vanderbilt Kennedy Center’s Treatment and Research Institute for Autism Spectrum Disorder (TRIAD), the SPARK study invites individuals of all ages with a professional diagnosis of Autism Spectrum Disorder (ASD), as well as their biological parents and siblings, to become participants.

During the three years she worked on “The Simpsons,” she was part of the team that won two Emmy Awards. “We all believed the show was quality, and we delivered that quality to the audience,”

Registration and participation are offered in two forms, either online and at home, or families can make an appointment to complete the process on-site at the Village at Vanderbilt. People are asked to share behavioral and medical information about themselves and also provide a saliva sample for DNA analysis. Gift cards valued at up to a total of $50, access to free autism resources through the project’s sponsor, and a potential for a return of results from the DNA analysis are offered.

In her role as outreach coordinator for SPARK, Carpenter communicates and coordinates among Vanderbilt researchers and clinicians; people with autism and their families; representatives from the 25 other centers around the country that are part of the SPARK study; and the Simons Foundation, the nonprofit organization that is funding the project (SPARK actually stands for “Simons Foundation Powering Autism Research for Knowledge.”)

It’s a lot to juggle, but Carpenter is up to the task. She used to work with Bart Simpson.

Carpenter was animation production coordinator, among other jobs, at “The Simpsons” for three years across four seasons of the series. She says that the skills she honed while working on the show was valuable training for the role she holds with TRIAD now.

“It was communications work and project management,” she said. “I managed production of all of the artwork for each episode.”

That meant acting as a liaison with writers, producers, designers, artists and directors — all on tight deadlines with tight budgets, constant changes, and the knowledge that millions of people were going to be watching your work on Sunday night.

Then came a twist that, if you saw it in a Hollywood movie, you wouldn’t believe it. Carpenter was driving in her lime green Ford Focus at the time.

“That required being able to communicate effectively with all kinds of personalities,” she said. “It was a really intense work world.”

Carpenter’s path from “The Simpsons” to Vanderbilt was not a straight one, but she says that every step of the way the constant was communicating and problem-solving among groups and individuals.

Hollywood to Springfield to Nashville

The Michigan native majored in journalism and Spanish at Michigan State, where she gained experience in writing for the newspaper, radio broadcasting Big 10 volleyball and softball and producing a feature-length independent film.

“There are so many ways to share information and tell stories and I really liked learning about all of them,” she said.

Carpenter’s “Simpsonized” caricature frequently shows up in the background of episodes.

When she began planning what she was going to do after college, a Michigan State professor put her in touch with a screenwriter in California, which led to an internship at Warner Brothers. That was good experience, but then came a twist that, if you saw it in a Hollywood movie, you wouldn’t believe it.

Carpenter was driving (in her lime green Ford Focus) when she was involved in a hit and run car accident, and when she was being treated in a nearby hospital emergency room, she began talking with the patient on the next gurney.

“He worked at a special effects prop house, and I ended up getting a job at his firm,” she said.

She was no longer an intern—she had a full-time job in the movie business in Hollywood.

Her next big break didn’t come courtesy of a fortuitous car accident — it came from a babysitting connection back home.

“A woman I used to babysit for in Michigan had a college roommate who worked on ‘The Simpsons,’” she said. When Carpenter made contact, though, there was no job — at least not at “The Simpsons.” But the former roommate was in desperate need of a part-time nanny. So, Carpenter began working two jobs — her movie job at the special effects prop house, and as a part-time nanny on the side.

That meant she was in perfect position when there was a chance to land a full-time job with the production company that makes “The Simpsons.”

Carpenter first worked on another show made by the same production team, “Futurama,” and, based on her success at improving the workflow and communication on that show, soon was able to join her new coworkers Marge, Homer, Bart and Lisa.

When she decided to take a look at Vanderbilt as a place to work, Carpenter realized that the skills that she had brought to the entertainment world would be a good fit.

During the three years she worked on “The Simpsons,” 2002 to 2005, she was promoted from animation production assistant to animation production coordinator, and was part of the team that won two Emmy Awards. She was also “Simpsonized” by veteran character designer Joe Wack and can often be seen walking dogs or driving cars in the background of some episodes if you look closely.

She says that everyone took pride in making really good television. “We all believed the show was quality, and we delivered that quality to the audience,” she said.

Still, after 72 episodes, she was ready for something else, and a friend suggested she take a look at Nashville.

Pride in the success of SPARK

She took a job as a production coordinator at Country Music Television (CMT), moved to the Great American Country (GAC) network. She worked for Roy Orbison’s publishing company and fan club, another publishing company whose primary clients were Alan Jackson and Keith Urban, and was in the marketing department at the Country Music Hall of Fame for a while. 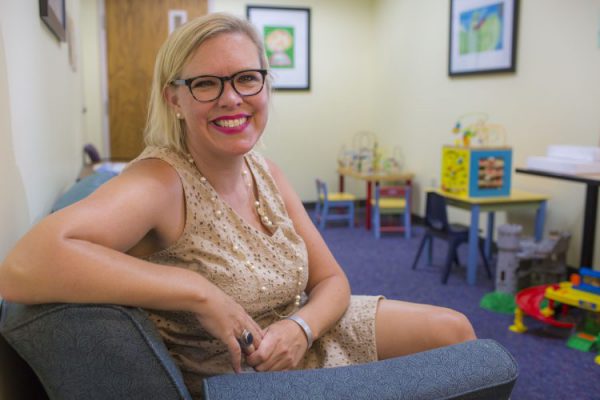 If you work on a project to help children, like Sarah Carpenter does, you get to have toys in your workplace. Photo by Anne Rayner

When she decided to take a look at Vanderbilt as a place to work almost seven years ago, Carpenter realized that the skills that she had brought to the entertainment world would be a good fit.

Working on the SPARK project for the past two years, Carpenter collaborates with medical providers, governmental agencies, advocacy groups, academic institutions, community organizations, retail outlets and more in order to recruit families and individuals with autism into the study. She creates and develops custom scripts to better connect with families about the project and ask for their participation.

“Genetic research can be tough to explain but I’m proud of how I reach people and I’m proud of our participants for trying something new to help us learn more,” she said. “Of the 25 SPARK sites across the country, ours is one of the most successful. Right now we have over 5,200 people enrolled through our network.”

Currently, in an effort to connect with even more people, she’s inviting families to complete the process on-site.

Amy Swanson, Vanderbilt site coordinator for SPARK, said Carpenter’s enthusiasm and dedication to the program is a valuable asset.

“Sarah’s excitement to connect with families is contagious and she brings a fun energy to the project,” Swanson said. “SPARK requires a great deal of outreach and we want to be available to all Tennessee families who have questions about what it will mean for their family to take part in this genetic study as well as available resources after becoming part of the SPARK community.

“Sarah’s energy and enthusiasm are quite unique and the perfect match for SPARK.”

“You can feel the love and pride,” she said. “What I learned there — that’s what we’re doing here.”

To find out more about the SPARK study or to become a participant, visit www.sparkforautism.org/vu. You can also contact Sarah directly with any questions at s.carpenter@vumc.org or 615-875-9970. 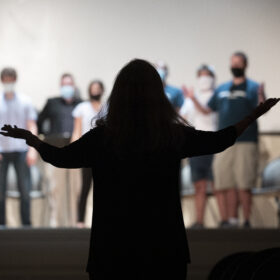 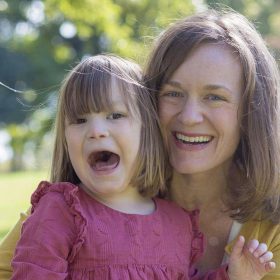 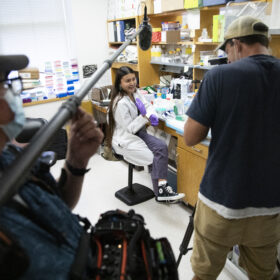