Twice as nice: Molly Knostman, previously recognized with a Credo Award, honored again for leadership of the adult pharmacy.

She has built a reputation for volunteering for complex tasks, not because they are part of her job description but because of her passion for innovation and patient care. 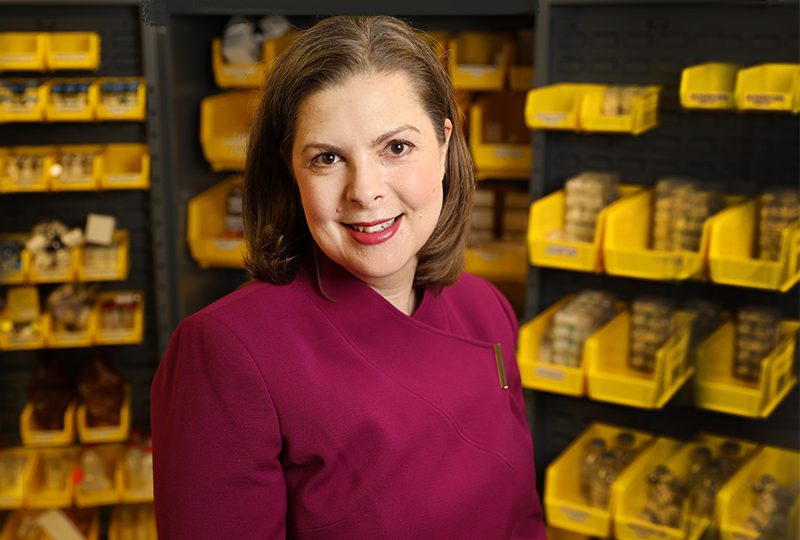 Molly Knostman, PharmD, MHA, describes herself as the pharmacist behind the pharmacists in frontline positions in Vanderbilt University Adult Hospital.

Knostman, director of pharmacy operations for Vanderbilt University Adult Hospital, is being modest. With more than 17 years of leadership, mentorship and project management experience at Vanderbilt, she has built a reputation for volunteering for complex tasks, not because they are part of her job description but because of her passion for innovation and patient care. And that is why she is the latest recipient of the Five Pillar Leader Award, presented at the Feb. 19 Leadership Assembly.

Her team members rave about her.

“Molly has developed a reputation for being a mentor to many pharmacy staff, some who have stayed in the adult hospital pharmacy and many others who have moved to other areas of the department in leadership roles thanks to Molly’s mentorship,” one wrote in Knostman’s award nomination.

Another noted that Knostman coordinated the implementation of the Omnicell XT dispensing cabinet, a yearlong project that replaced nearly 190 different cabinet locations across the VUMC enterprise. Knostman gives the credit right back to her team.

“I was very fortunate to work with a very excellent group of team members, anyone from nursing education, nursing informatics, Health IT, to space and facilities and facilities management, in addition to the pharmacy team members, to help the end users have a very seamless experience in changing from one cabinet system to another,” she said.

Knostman has also been the pharmacy lead for the expansion of inpatient units into the sixth and seventh floors of Medical Center East.

It’s no surprise that Knostman is a previous winner of the Credo Award. Her passion for building a better pharmacy is rooted in a passion for patient care.

“The thing that most attracted me to Vanderbilt when I first came to the organization were two things: the innovation and the leadership within the pharmacy,” she said. “I have not been disappointed by either of those. Vanderbilt continues to look at how we can better take care of patients and that includes pharmacists and pharmacy technicians within that equation. We have been able to advance the profession of pharmacy and further take better care of patients with the combination of both of those things. I continue to be very fortunate to work with the caliber of leaders that we have not only here in the pharmacy, but across the Medical Center, so that I can continue to learn and push myself to be a better leader with my interactions with them on a daily/weekly basis.”