“She loves it; she goes in tail wagging." 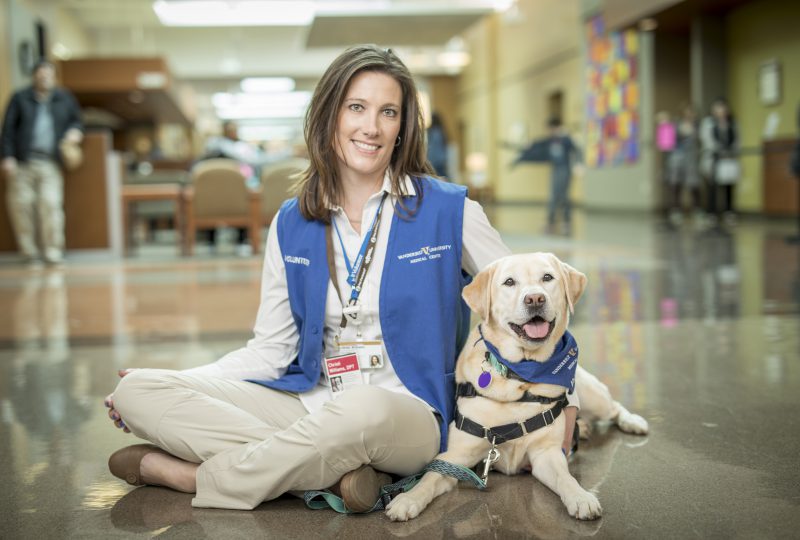 Christi Williams and Layla are welcome sights around Vanderbilt University Medical Center. Now the duo (along with new puppy Jackson) are featured in a Pedigree dog food commercial. Photo by John Russell

She’s known around the halls of Vanderbilt University Medical Center as the “Rehab Lab” and now Layla and her owner and pet therapy volunteer Christi Williams have been featured in a TV commercial for Pedigree dog food.

While looking for a therapy dog to feature, Pedigree representatives reached out to the VUMC Volunteer Services Department, who suggested Williams and Layla.

“No one is a stranger when you have a dog. Everyone is willing to come up and meet you, and talk to you about anything and everything. Often we’re told we absolutely made that person’s day, just by coming in to see them.”

The spot, which was shot for the Great American Country (GAC) network, highlights the importance of pet therapy.

“It was great. It was a lot of fun. They had a whole video crew. They set-up the whole house,“ Williams said.

“It was about a six-or seven-hour day of filming with interview questions. And we even got our new puppy, Jackson, involved in it, so he’s featured in the commercial as a future pet therapy dog.”

During the two years Williams and Layla who have been coming to VUMC, Williams says it’s easy to see the impact Layla has on patients and staff.

“Everything changes when we walk in the room,” she said. “The whole atmosphere changes. Everybody instantly gets into a happy mood.”

“No one is a stranger when you have a dog. Everyone is willing to come up and meet you, and talk to you about anything and everything. Often we’re told we absolutely made that person’s day, just by coming in to see them.”

Williams is an associate professor at Belmont University in the School of Physical Therapy, and she not only volunteers in pet therapy programs, she’s currently researching the effects of therapy dogs.

“Kids will engage in their therapy more. They’re more likely to try new things that they are otherwise intimidated to try. And their confidence improves, which is pretty neat to see,” Williams said.

“We’ve got a great local group of volunteers, but I just want to get the word out and educate more people on how to do it. If one person can get the message and see it (the commercial) and want to do it, then it was worth it.”

View Christi, Layla and Jackson’s moment in the spotlight here: